Today, a U.S. District Judge sentenced Jared Lee Loughner to 7 consecutive life sentences, plus 140 years, without the possibility of parole, for the January 8, 2011 shootings at an Arizona shopping center that left six dead and 13 wounded, included Rep. Gabrielle Giffords. Giffords had been conducting a meet-and-greet with constituents when Loughner opened fire.

At the sentencing, Giffords appeared and looked at Loughner while her husband, Mark Kelly, read a statement referring to Giffords' severe injuries (she was shot in the head): "Her life has been forever changed. Plans she had for our family and her career have been immeasurably altered. Every day is a continuous struggle to do those things she was once so very good at... Gabby struggles to walk. Her right arm is paralyzed. She is partially blind. Gabby works harder in one minute of an hour - fighting to make each individual moment count for something - than most of us work in an entire day." He also added, "Gabby would trade her own life to bring back any one of those you savagely murdered on that day." 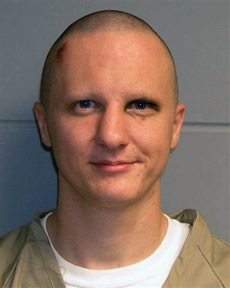 Loughner, now 24, who has left a trail of bizarre handwritten and online messages and seemed to be extremely troubled, had been prevented from returning to his community college until he was cleared by a mental health professional. During his rampage, he was using a Glock 9mm a month and a half before the shooting; he had tried to buy ammunition at one Wal-Mart but the store refused because of his strange behavior. He managed to buy ammo at another Wal-Mart.

One witness recounted how she helped tackle him, “I need him to know where he is and why … to remember every day what he did and the horror he set loose," while one woman, Mavy Stoddard, who was wounded, described how her husband died in her arms, "Jared you ruined my whole life... You took away my life ... And my reason for living. And you did this because you wanted to... I forgive you.”

Judge Larry Burnss said, "The evidence clearly shows that he knew what he was doing, despite his mental illness." In describing his sentence, Burns explained, "Each of those victims was important. It reflects each of those individual lives. There is a symbolic nature in this.... He should never get out of prison. I find this is just punishment. He will never have the opportunity to pick up a gun and do this again."

Loughner did not speak at the hearing. His parents wept. Giffords retired from Congress earlier this year; over the summer, she made a moving appearance Democratic National Convention and led the recitation of the Pledge of Allegiance: