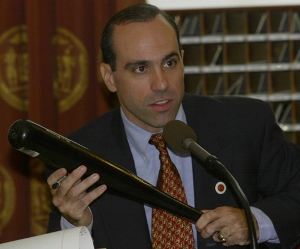 The video of City Councilman James Oddo letting the f-bombs drop on a Norwegian TV comedian is getting mixed reactions - and a fair number of chuckles - from New Yorkers, but now it turns out that he wasn't meant to be a poor sap duped into answering stupid questions about whether Barack Obama is an American citizen and "Hillary Clinton's incident with a cigar."

A spokesman for the Norwegian program "Rikers Rost" tells the Staten Island Advance that the interviewer, Pia Haraldsen, was supposed to be, well, roasted: "Creating a situation where the person being interviewed has some problems understanding what's going on because it's a tad absurd, that's where the comedy lies. I believe most people, at least in Norway, understand that this is about the ignorant, blonde stereotype's lack of knowledge." Ohhh - it was supposed to be one big blond joke. That makes so much nonsense.

Some people feel that Oddo embarrassed Staten Island - and Italian-Americans - but others were thrilled. One email Oddo got, per the Advance, read: "Your response to those liberal European d-bags was the greatest thing I have ever seen. I love how you did not take any [expletive] from them when they tried to get you to say something bad. I am a Texan and I have a lot of pride in that, but I can say don't [expletive] with a true New Yorker!"

Oddo himself told the Advance, "Obviously, do I regret demonstrating a truncated list of the vocabulary words I memorized? Yeah...I have a good sense of humor. I didn't find anything funny about these questions. The implication was we're a racist country. That's what the Obama question was. The Hillary Clinton question was beyond the pale."

The Daily News published an editorial in support of Oddo: "Ourselves, we salute the man as a genuine Stand-Up New Yorker. Our compliments...Reality TV at its absolute very finest. Oh, let's watch it again."