Jagr's Reign As Rangers Captain Over 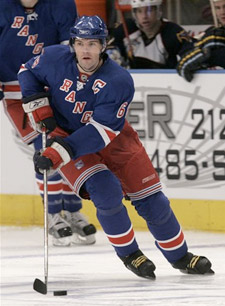 Back in 1997, the Rangers lost their captain when Mark Messier headed to the Pacific Northwest to play for the Canucks. On Thursday, they brought Vancouver's captain, Markus Naslund to New York with a two-year, $8 million deal. Thanks to the salary cap and other roster considerations, this move means Jaromir Jagr's New York career is over. Rangers general manager Glen Sather sounded like he had gotten tired of waiting for Jagr to decide what he wanted to do and let Jagr know on Thursday that the team was moving in a different direction.

As good a career as Jagr has had, he is 36, and that means he's easily on the downside. Unfortunately, Naslund is no spring chicken either at 35, but he is a bird in the hand. He's been a stalwart for the Canucks as a 12-year player and captain since 2000. Sather said he kept hearing from Jagr that the winger wanted to be a Ranger but never made a specific demand. Inklings have come that Jagr will play in Russia, so good luck to him. His Rangers career never resulted in any deep playoff runs. That isn't all his fault, but he can't take that many bows either.

#hockey
#Jaromir Jagr
#Markus Naslund
#rangers
#sports
Do you know the scoop? Comment below or Send us a Tip