An early summer heat wave has touched down in New York City, pushing temperatures up to 90 degrees and bringing with it all sorts of scorching delights/searing horrors. And just as the excessive humidity affects different people in different ways, the city's infrastructure seems to have varying reactions to the heat index. A small bridge between Brooklyn and Queens, for example, appears to have overheated and quit working.

A tipster tells Gothamist that the Metropolitan Avenue Bridge, a double leaf bascule bridge that stretches over Newtown Creek's English Kills section, is currently out of commission "because the drawbridge is too hot and won’t close all the way." He notes that the bridge has been shuttered since before noon, and that he spotted workers hosing down the two-way span earlier today. The bridge is currently closed, but appears not quite flush in the middle. 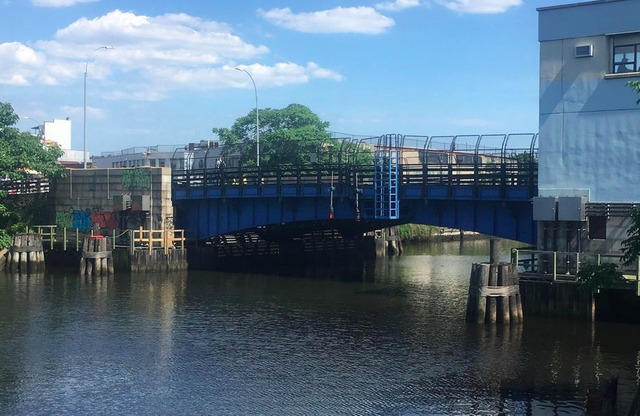 A spokesperson for DOT confirmed that the Metropolitan Avenue bridge is stuck, adding that electricians and other city employees are currently at the scene attempting to cool it off.

This is apparently a thing that happens with bridges sometimes. During a heat wave last summer, Chicago had to call in a fire-boat to hose down the DuSable Bridge, after its joints swelled and became stuck in place.

As for our sweaty, bloated bridge, authorities are currently rerouting vehicles elsewhere (there's another crossing nearby), while permitting pedestrians and cyclists to cross. It's unclear when the bridge is coming back—but DOT says they'll keep us posted.

Bailing on your responsibilities and demanding a cool bath at the first sign of New York City summer? Hot Bridge is all of us.