It's Playoff Time and the Giants Head South 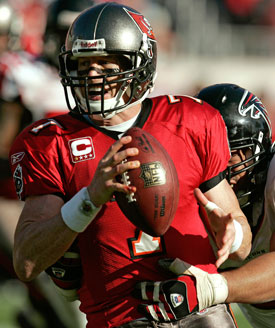 This week we'll find out if last Saturday's game against the Patriots was worth it. If you recall, Tom Coughlin decided not to rest his starters during the loss to the Pats and a couple of players were injured. Based on the latest information, it sounds like Sam Madison is out, while Kawika Mitchell and Shaun O’Hara are questionable at best, so the Giants will have to hope that some of their bench players can step up and fill those holes. In addition, New York faces Jeff “Giant Killer” Garcia, who is 4-1 in his career against the Giants and 2-0 in the playoffs.

One piece of good news is the weather. The Giants and especially Eli Manning will look forward to a beautiful day in Tampa. That will be important because Tampa is one of the best defensive teams in the league and Eli simply cannot mishandle snaps and fumble the ball or the Giants will be in trouble quickly. Tampa is especially good against the pass, so look for the Giants to try and run early to establish a physical tone.

It should be a wild game. Tampa has gone so far as limiting ticket sales to out of state residents to preserve their home-field advantage, while Ronde Barber has shown that both Barber brothers like to talk about Eli. When the dust settles, the Giants eek it out win their first playoff game in seven years.