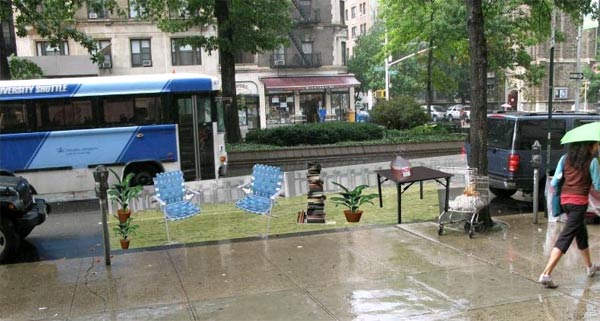 Today, all over the city, ordinary parking spaces will be transformed into temporary public "parks." The Trust for Public Land has organized a nationwide Park(ing) Day, and there are a number of these Park(ing) projects all over the city - Open Plans has the details on the NYC locations.

For instance, Colin Beaven, "No Impact Man," will be sponsoring a Park(ing) Lot at 7th Ave, between 24th and 26th Sts.; Times Up & Green Apple Maps have one at 7th Ave and Charles St., in front of Birdbath Bakery (complete with bike mechanic who can check out your bike); and Pratt students are holding a class at Myrtle Ave, btw. Washington and Waverly.

There are other locations outside the Museum of Modern Art, Lincoln Center, and Penn Station. Transportation Alternatives' executive director Paul Steely White said, "Less than half of NYC households even own cars, and yet we give over so much road space to parking them. What if one parking space on every block was converted into a greener public space that everyone could use? That’s the message behind Park(ing) Day."