It's Open Enrollment Season: Over One In Ten NYers Lack Health Insurance

Just in time for open enrollment, Comptroller Scott Stringer has announced that, as per his analysis, slightly more than one out of every ten New Yorkers is biking, Ubering, and tourist-dodging around the city without health insurance. That's more than 962,000 New Yorkers.

The neighborhood-by-neighborhood breakdown [PDF] reveals a wide range of percentages, and paints yet another picture of de Blasio's oft-referenced Tale of Two Cities.

Sunnyside, Jackson Heights, Corona and Bushwick all hover around 22% uninsured, while neighborhoods like the Upper East Side, Upper West Side, Battery Park City, Murray Hill, and Greenwich Village are all at least 95% insured. 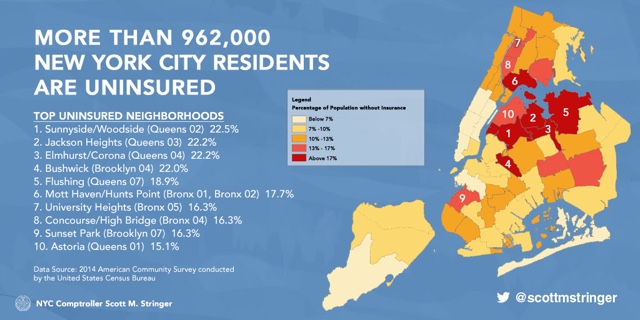 Neighborhoods with the fewest insured residents, Stringer points out, are home to many immigrant families and recently-26 young people—both demographics that are less likely to have the expendable income for comprehensive healthcare plans.

"The situation is particularly dire in neighborhoods with large immigrant and younger populations like Jackson Heights, Corona, and Bushwick where close to one in four New Yorkers don’t have health insurance," he said in a statement.

PSA: The Affordable Care Act's open enrollment period started November 1st, and runs through December 15th, for all coverage beginning next January. Enrollment will stay open through January 31st for coverage starting as late as March 1, 2016. You can check out the State's affordable options here.

#bushwick
#health insurance
#Open Enrollment
Do you know the scoop? Comment below or Send us a Tip