It's Official: Obama Welcomes Clinton to His Cabinet 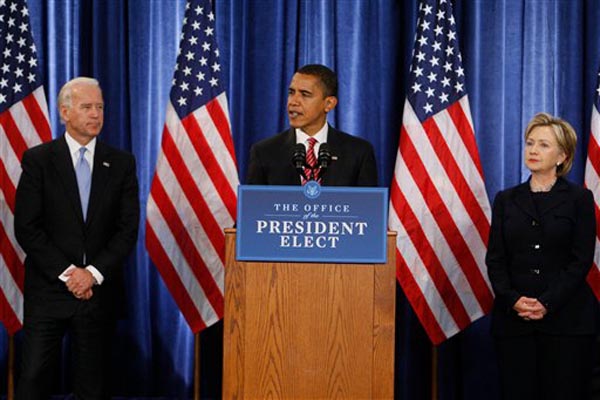 President-elect Barack Obama is about to announce his national security team, which includes announcing Senator Hillary Clinton as his Secretary of State-designate.

Politico looks at how the Obama-Clinton connection evolved. A Democratic source says, "I think that the people around each disliked the other candidate more than they ever disliked each other. If you look at the reporting around the VP process, Obama often asked his team, 'should we take another look at Hillary?'"

Update: Obama says that he's confident Hillary Clinton is the right person to lead the State Department. He also says he's pleased that Secretary of Defense Robert Gates is staying on and emphasized he wanted a responsible end to the war in Iraq and wants to make sure they have the resources to fight Al Qaeda in Afghanistan. He says the team--which includes AG nominee Eric Holder, General James Jones as national security adviser, and Arizona Governor Janet Napolitano as homeland security chief--has already discussed the terror attacks in Mumbai. Oh, and Vice-President-elect Joe Biden is there too.

Obama gives the floor to his appointees, including Clinton, who thanks her fellow New Yorkers "for giving me a job I love" and allowing her to work on issues she cares about. She adds that they prepared her for the jobs, since New Yorkers will speak their mind "in many languages," and says leaving the Senate is very hard.

#barack obama
#hillary clinton
#president-elect obama
Do you know the scoop? Comment below or Send us a Tip