It's Official: Amazon Coming To Long Island City In Exchange For $1.5 Billion In State Subsidies

Capping off what is likely the most hyped and humiliation-inducing search for a satellite office in modern history, Amazon has officially announced its plan to bring a second and third "headquarters" to New York City and Northern Virginia.

According to an Amazon press release, one half of the so-called HQ2 will soon land in Long Island City, where it will purportedly create 25,000 jobs in exchange for a cool $1.5 billion in state incentives. It's unclear exactly where or when this massive tech campus will sprout, but the state is reportedly eyeing a site owned by plastics company Plaxall, as well as two waterfront spots previously earmarked for the LIC Innovation Center. 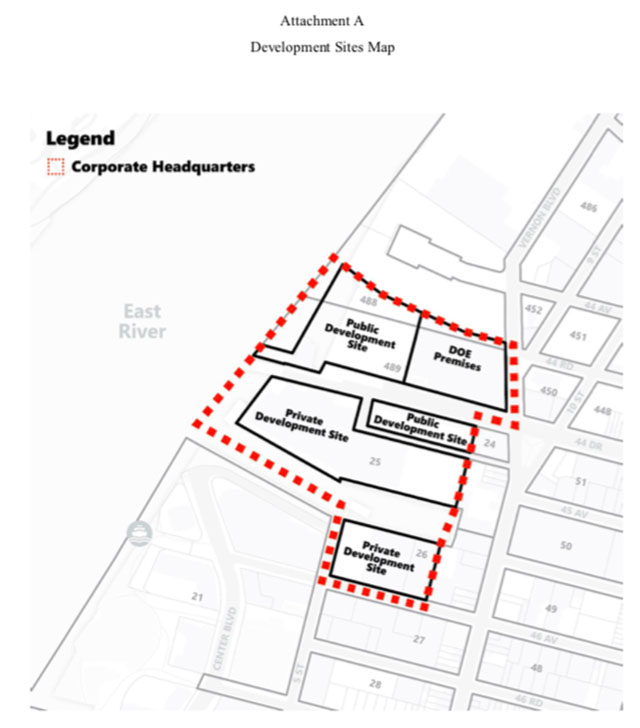 In a statement, Governor AndrewAmazon Cuomo said, "When I took office, I said we would build a new New York State—one that is fiscally responsible and fosters a business climate that is attractive to growing companies and the industries of tomorrow." In doing so, he appears to have offered Amazon a refundable tax credit of up to $1.2 billion through New York State's Excelsior Program, and a cash grant from the Empire State Development Corporation of $325 million "based on the square footage of buildings occupied in the next 10 years." The retail giant has promised its new jobs will have an average salary of $150,000. [More on the subsidy breakdown here].

The terms of the deal were not disclosed beforehand, and representatives from Cuomo's office and Empire State Development did not immediately responded to Gothamist's inquiry about the purpose of handing millions of dollars in cash to one of the richest companies in the world. Amazon is also planning to apply for subsidies through the New York City’s Relocation and Employment Assistance Program, which could be worth another $1 billion.

Actually it'll be $2.5 billion. Amazon says it will apply separately for subsidies through the REAP program, which is likely to be worth another $1 billion https://t.co/l41GfOZT8w https://t.co/kcI1XdKvW2

Already, local politicians and community members are raising the alarm about both the corporate tax breaks and the impact on living conditions—particularly housing costs and congestion—that the company is known to bring. In a joint statement, State Senator Michael Gianaris and City Councilmember Jimmy Van Bramer said they had "serious reservations" about the deal.

"Offering massive corporate welfare from scarce public resources to one of the wealthiest corporations in the world at a time of great need in our state is just wrong," they noted. "We were not elected to serve as Amazon drones."

Assemblymember Ron Kim, who represents Flushing, also slammed the megadeal, saying: "This unilateral decision by Governor Andrew Cuomo to transfer billions to the richest man on this planet is not just an insult to every taxpayer in New York but also will destroy our democracy."

Kim said that he plans on introducing legislation that would severely limit the state's power to offer subsidies, and would instead direct that money toward buying and cancelling troubled student debt for people living in New York. "Instead of showering a super-monopoly company like Amazon with money that they don’t need, we should be passing legislations to bust them up and divert all corporate welfare money to help people in our community," he said.

I live near this. Long Island City is overcrowded and over developed. It is also lacking in necessary infrastructure to handle the amount of traffic/people there. Regular subway disruptions, traffic jams heading to Manhattan etc. https://t.co/YjaDEwQTp8

Amazon is a billion-dollar company. The idea that it will receive hundreds of millions of dollars in tax breaks at a time when our subway is crumbling and our communities need MORE investment, not less, is extremely concerning to residents here.

It is likely that public education, transit, social services, &/or a variety of other public goods in New York & Virginia will suffer for years to come as a result of the corporate subsidies Democratic governors @andrewcuomo & @RalphNortham have excitedly promised to @amazon.

Here are the officials who signed a letter last October urging Amazon to expand in NYC. @TishJames signed. So did my House @RepYvetteClarke and my State Senator Montgomery. Candidates for Public Advocate @JumaaneWilliams, @MrMikeBlake, @ydanis, @MMViverito all signed too. pic.twitter.com/YGeUM0H56f

.@RWDSU, one of @NYGovCuomo's staunchest supporters, doesn't like the @amazon deal for Long Island City:

"Tax payers shouldn’t be on the hook to help Amazon be profitable - it’s a massively profitable private business. New York, we can and should do better."

On Wednesday, Queens community groups and Long Island City representatives will host a conversation about what happens next, and how to "say no to the richest company in the world robbing over $1 billion from state funding for our schools, transit and housing."

#amazon
#hq2
#jeff bezos
#lic
#long island city
Do you know the scoop? Comment below or Send us a Tip