This past summer, the City Council gave beat cops the power to charge reckless drivers who kill or injure pedestrians. Previously, drivers had to be intoxicated or break numerous laws to face consequences, or officers had to witness the crash, essentially making the standard for charging such dangerous drivers higher than if they had stumbled upon a murder scene. Since the so-called Right-of-Way Law went into effect at the end of August, 12 drivers have been arrested and charged with misdemeanors for failing to yield.

"This was an important tool we achieved with the City Council last year. And we’re seeing the NYPD put it to wise use, both at the scene of deadly crashes and after their investigations," mayoral spokesman Wiley Norvell says. "It's definitely moving us in the right direction."

According to data provided by the Mayor's Office, all but two of the crashes in which drivers were charged with misdemeanors under the new code 19-190 were fatalities. All but one of the incidents were investigated by the NYPD's Collision Investigation Squad, which only investigates crashes that involve a fatality or a critical, near-fatal injury, which account for just 10% of all serious crashes.

"The city has taken an important step toward getting serious about failure to yield, the most deadly traffic violation for pedestrians," says Paul Steely White, the executive director of Transportation Alternatives.

"Unfortunately, Section 19-190 isn’t being applied often enough, not by a longshot. In the four months of 2014 after 19-190 went into effect, the NYPD reported more than 10,000 moving violations involving failure to yield. But charges were brought in only 12 cases—or just a little over 0.1% of the time.”

Beat cops, not the 27 highly trained investigators of the NYPD's CIS unit, investigate 90% of crashes, and only one of the 12 cases in which the new code was applied involved a precinct-level officer.

In that case, a 70-year-old woman was crossing East 96th Street at the intersection of Second Avenue when she was hit by a cab driver who ran a red light on East 96th. She suffered serious but not life-threatening injuries.

The cabbie told the responding officer that he hadn't made contact with the woman, but a witness contradicted him, and he issued the driver a misdemeanor Desk Appearance Ticket for failing to yield. The charge carries penalties of up to $500 in fines and 30 days in jail.

"It's not enough to have a tiny cadre of police officers empowered to issue these summonses in a class of cases that's less than 10% of serious crashes," says attorney and safe streets activist Steve Vaccaro, who represents the woman who was struck in the crosswalk on 96th Street.

"There are many times when just from the circumstantial evidence from the scene, it's inescapable, that the driver violated the right-of-way of a cyclist or pedestrian, and that would be a basis for making the arrest or issuing a desk appearance ticket for this violation. Just like when a police officer comes upon any crime." 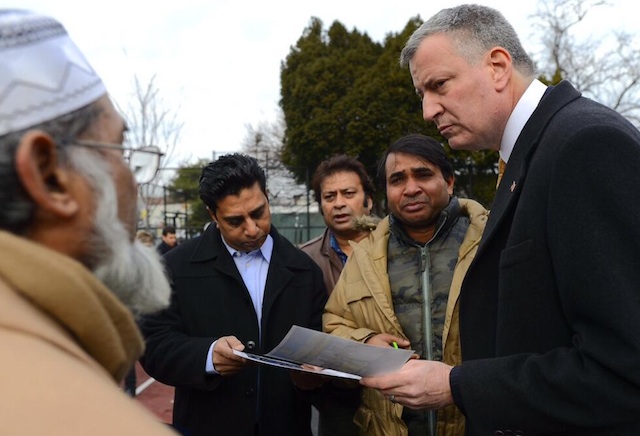 Mayor de Blasio speaks with the family of 8-year-old Noshat Nahian, who was killed crossing Queens Boulevard in December of 2013 (Mayor's Office)

In October, Streetsblog asked the NYPD's Chief of Transportation Thomas Chan how the department would begin to use the code to hold more dangerous drivers accountable. Chan stressed that it would take time to implement the change and to retrain his officers, points that have been repeated by members of the mayor's administration.

At a press conference in the Bronx earlier today held to highlight the administration's Vision Zero accomplishments, Chief Chan was asked about Commissioner Bratton's absence, sluggish levels of speeding enforcement, and the fact that no traffic enforcement is part of the police academy's curriculum.

"The Commissioner's fingers are definitely in the pie of Vision Zero. He's made sure that Vision Zero is an important part of his administration," Chan said. "Overall...our officers are heading in the right direction. And I think our officers are the best officers in the world and I'm proud to be a New York City police officer."

Mayor de Blasio was also asked about the seeming reluctance on the part of the city's District Attorneys to prosecute dangerous drivers. Traditionally, DAs have had an extraordinary amount of involvement in NYPD investigations involving serious crashes. Unless a driver is intoxicated or leaves the scene of the crash, CIS consults with the DA's office before making an arrest, and the DA determines whether criminal charges may be brought.

"I think there's been some real progress made, certainly some legislation that passed the City Council for example, to get to real consequences for motorists who do this to other people," de Blasio said. "So my message to everyone…is we all have to work in concert to create an atmosphere where people don't speed, don't break the law, don't drive recklessly, and if they do that they'll be real and consistent consequences."

Dana Lerner's 9-year-old son Cooper Stock was killed on the Upper West Side by a cab driver as he crossed the street with his father. The cab driver received a traffic ticket for failing to yield.

"The police need to be reeducated," Lerner said. "We don't even know if the police, how many of the police have been educated on this," Lerner said of the new code. She used a new law named after her son, which strips cab drivers of their licenses if they fail to yield and kill or injure pedestrians, as an example of ignorance of the issue.

"Half the cab drivers don't even know about it. I get into a cab, nobody knows what it is. The dissemination of information is a problem. Bratton hasn't said a word about this."

Vaccaro likens changing the police department's attitude towards traffic violence to "doing a 180 on the Queen Mary."

"But we're not going to get there by floating along. Just like there's going to be training for every officer on the use of chokeholds, there has to be training on traffic violence for all officers just as much."

#failure to yield
#pedestrian fatalities
#pedestrian safety
#right of way
#vision zero
#longform
#original
Do you know the scoop? Comment below or Send us a Tip