It's Not Such A Perfect Day: Laurie Anderson Was Trapped In Spa's Hyperbaric Chamber

Earlier this week, a woman was trapped in a hyperbaric chamber at a Manhattan spa. Now, it turns out the woman was beloved performance artist Laurie Anderson.

Earlier news reports explained that the then-unidentified woman had an oxygen therapy treatment at Pure Flow in Chelsea, but became uncomfortable. According to the Post, she "tried to unzip herself from inside the blue hyperbaric tube at Pure Flow on West 15th Street near Eighth Avenue around 9 a.m. — but the zipper got stuck and she panicked, authorities said. As she struggled to breath, she shouted to employees but nobody heard her, the sources said. She frantically began texting a friend, who called 911 at around 9:15 a.m., authorities said."

By the time firefighters reached the scene, Anderson had managed to liberate herself from the chamber, the sources indicated.

A firefighter found the stressed-out singer standing by herself when he entered the room where Anderson and other customers pay $100 for an hour of oxygen treatment.

Pure Flow owner Andrew Barile said the woman was inside the chamber for about 45 minutes and suggested she fell asleep and became disoriented after waking up.

“There was a miscommunication on the timing,” he said, denying any malfunction.

Anderson is the widow of rock legend Lou Reed, and the Daily News's front page acknowledges this (under LeBron James): 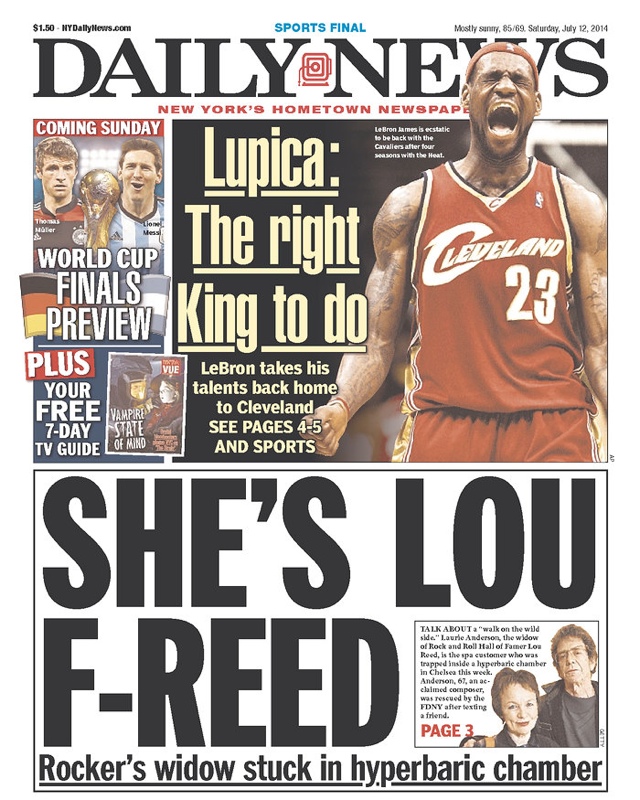 A certified hyperbaric tech told the Daily News, "It was probably safe for her to use her phone, but she should never have been left alone. That’s a real danger."