Holding back tears, the mother of Victoria Nicodemus told the crowd gathered at the vigil for her daughter last night that there were more than enough warning signs that the reckless, unlicensed driver who ended her daughter's life in early December should not have been behind the wheel in the first place.

“An example has to be made at some point, when a driver decides to not hit a bus but instead hit a person,” Elsa Nicodemus said. "It's murder, even if you're sober. It's murder."

On December 6th, Nicodemus, a 30-year-old artist and curator, was shopping in Fort Greene with her boyfriend when Marlon Sewell drove his 2004 Suburban onto the sidewalk in front of Habana Outpost on the corner of Fulton Street and South Portland Avenue, while trying to avoid a bus that had pulled over. Nicodemus was killed; her boyfriend and another pedestrian suffered injuries.

Sewell was arrested on the scene, but Brooklyn DA Ken Thompson only charged him with aggravated unlicensed operation of a vehicle, a misdemeanor, and operating a motor vehicle while unlicensed, a traffic infraction treated the same as a ticket for failing to use a turn signal.

Sewell had already been arrested for unlicensed driving last March, and just weeks before he killed Nicodemus he was summonsed for speeding in a school zone three times.

“We cannot tolerate little fines, a slap on the wrist. That is not appropriate, that is not relevant to the crime that happened at this corner. This crime destroyed a life,” said councilwoman Laurie Cumbo, who is putting together a town hall in January to discuss traffic safety in her Brooklyn district. “We have to move into action immediately.” 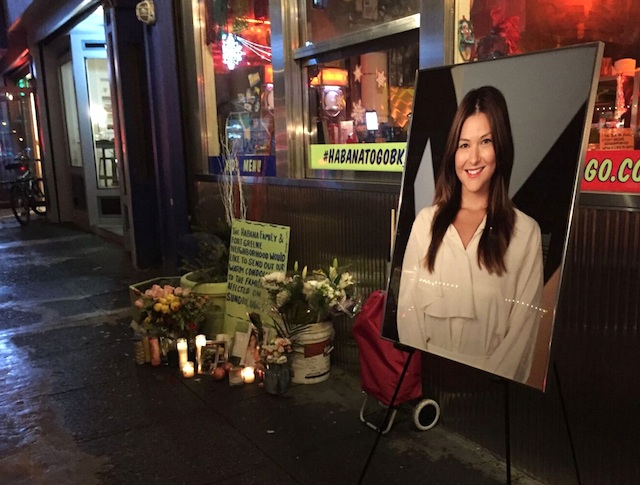 The vigil was put together by Transportation Alternatives, the pedestrian safety and bike advocacy group, as well as Indiewalls, the art company that Nicodemus worked for, which helps match artists with venues for their work.

An installation by the artist Mark Samsonovich inspired by Nicodemus was unveiled during the vigil on the corner where she was killed, featuring an owl on one side of the freestanding work, and the words “SAFE CITY” on the other. The image of the owl had been a work of Samsonovich’s that Nicodemus had expressed admiration for shortly before her death.

“She was such a force for our organization, always interested in challenging herself and advocating for other artists,” said Kirsten Nicholas, who worked with Nicodemus at Indiewalls. “We see the piece as a celebration of her passion and her life.”

Nicodemus’s brothers spoke about their lively and charismatic sister, and told the crowd that their sister's appreciation for both art and expression would best be honored by continuing to push for stricter pedestrian safety laws.

Public Advocate Tish James led the group in chants of “Justice for Victoria,” while State Assemblyman Walter Mosley encouraged advocates to support a bill that’s making its way through the state assembly that would strengthen penalties against unlicensed drivers who kill or injure pedestrians. Brooklyn DA Ken Thompson has yet to bring further charges against Sewell.

“The most important thing for the DA to know is that the city is watching,” Paul Steely White, director of Transportation Alternatives, told Gothamist. “Thanks to the leadership from the family and the elected officials we saw tonight, there’s a strong likelihood that the full extent of the law will be brought to bear on this."

White has pushed for the district attorneys in the five boroughs to step up and prosecute reckless drivers. In New York City, homicide charges are brought against the driver in less than 7% of cases where a pedestrian or cyclist is killed.

"What we’re seeing is what happened with drunk driving thirty years ago," White said. "These aren't accidents. We know these are preventable tragedies and that we can bring enforcement, meaningful consequences and better street design to make these tragedies a thing of the past.”

#fort greene
#ken thompson
#pedestrian safety
#Victoria Nicodemus
#vision zero
Do you know the scoop? Comment below or Send us a Tip