Thousands of protesters streamed into Washington Square Park Wednesday night for an “emergency rally” in support of immigrants and Muslims facing threats from President Trump. Organized by the Council on American-Islamic Relations (CAIR), the rally was held in response to two executive orders signed earlier in the day by President Trump: one threatening to strip federal funding from sanctuary cities (municipalities where local law enforcement and city agencies generally refuse to cooperate with federal immigration authorities), the other directing construction of a wall on the US-Mexico border.

The appeal to New York’s immigrant backbone, echoed by many of the other speakers, drew large cheers from the crowd, who responded with booming chants of “No Ban/No Wall” and sporadic calls to “Lock Him Up.” Perhaps the biggest applause line of the night came a few minutes later, when Public Advocate Letitia James urged New Yorkers to “stand up to the federal government, the bullies, and an administration that is too male, too pale, and too stale.” 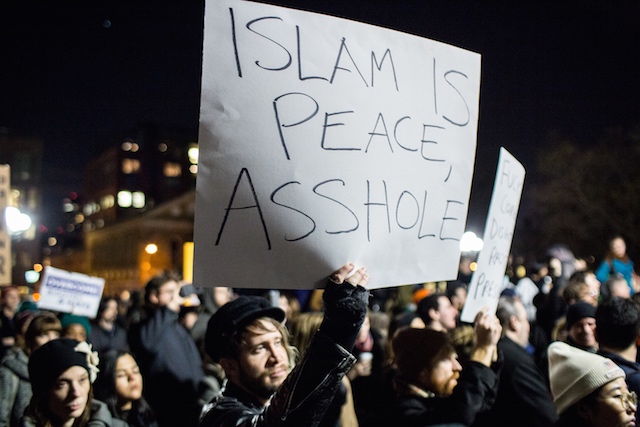 While the speakers made spirited appeals for defiance from under the Washington Square Arch, others in attendance were scrambling to prepare for Trump’s next anticipated executive action. Mohammad Golabi, a curator living in Crown Heights, huddled with fellow Iranian-American friends on the edge of the park’s fountain. His sister had received her visa just the previous day, he said, the culmination of a years-long process that would permit her to emigrate from Iran to the United States. But what might have been a joyous celebration was halted hours earlier, when the draft of an executive order suspending visas from seven Muslim-majority countries was released online.

“We got the news today that she cannot come to the country, because of the executive order,” Golabi said. “I know my family and friends all have someone who wants to come to visit, or they want to see their family in Iran. On a very human level, the need to see your family, it’s a basic thing."

The executive order, which Trump is expected to sign by the end of the week, would indefinitely ban Syrian refugees and temporarily suspend visas for immigrants from Iraq, Syria, Iran, Sudan, Libya, Somalia, and Yemen.

“We knew something bad would happen, but we were not really expecting this scale and this quickly,” added Sina Mesdaghi, an architect and Columbia graduate on a work visa from Iran. “Not only can I not visit my parents, but they cannot come here either. We’re basically frozen.”

Both men said they were concerned not only for their families abroad, but for Iranian-American friends who had temporarily left the United States. They wondered aloud about a colleague attending a conference in Canada and another friend on vacation in Mexico, and whether or not Trump’s executive action could void their legal status. As of now, it remains unclear if they’ll be permitted to return.

"I don’t even know where to begin right now—it’s just so stupid,” said Antonio Lopez, an employee of Housing Works. “My sister is a Mexican woman who just converted to Islam a few years ago, so I’m here for many reasons. I feel like I need to represent, and we need to resist.”

Monica Marks, a PhD student currently studying Middle Eastern Politics in Istanbul, said that Trump’s hateful rhetoric toward Muslims had caused her deep shame while living abroad. “I'm the beneficiary of so much love and support from Muslims, so for me it's really personal,” she said. “I have to do everything I can to throw my body in the way of policies that chip away at inclusion. I'm not afraid of Islam, but I am afraid of Trump and his agenda.”

Fear of Trump’s agenda - and recognition of the need for multi-ethnic solidarity in fighting that agenda - seemed to be a driving force in bringing out those who’d previously shunned political protests. Meret Openheim and Susan E. Meret, longtime members of the LGBT synagogue Congregation Beit Simchat Torah, said that while they’d not previously considered themselves political, Trump’s victory had left them with little choice but to join the protest movement. “We’re vulnerable as Jews and gay people, so we're siding with our friends,” said Meret. “Now on Friday afternoons we hold welcoming signs in front of mosques.”

The two women have attended several rallies since election day, and said they were glad to see the protests maintaining momentum after Saturday’s massive Women’s March.

“We have a country that is [over] 200 years old, and it could be gone in an instant if we don’t stand up for it,” added Openheim. “I think that’s politicized a lot of us.”

#immigration
#muslims
#protests
#washington square park
#original
Do you know the scoop? Comment below or Send us a Tip