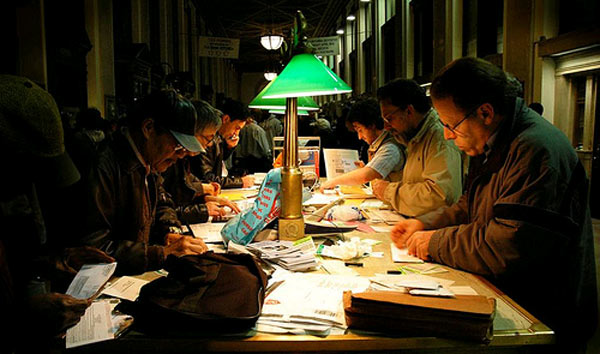 April 15 is finally here and if you haven't filed your tax returns (or for an extension), you better hustle. The James Farley Post Office at 421 Eighth Avenue and 31st Street, just west of Madison Square Garden, is where the procrastinators tend to congregate, because it is the city's only 24-hour postal facility.

In fact, free Pretzel Crisps will be distributed by thirty Uncle Sam's at the Farley Post Office this morning, and then at other post offices around the city (details here). New Penn Station mentions the Singing CPA will be on hand to sing "hits from his recently released his third album from 11pm to midnight." And we notice that there's a Tax Day Freedom Blitz from the Greater NYC Ron Paul Action Group at 6:00 p.m.--an assistant organizer says, "There will be signs. There will be Ron Paul signs."