It's Happening: Mayor De Blasio Is Running For President

After months of waffling, New York City Mayor Bill de Blasio is expected to officially launch a bid for the 2020 Democratic nomination on Thursday, before making a three-day trip to early battleground states to make his case to voters.

The mayor is scheduled to appear on Good Morning America on Thursday morning with first lady Chirlane McCray.

On Thursday de Blasio is scheduled to travel to Iowa for the first time as an official candidate, with events scheduled in Fort Dodge and Sioux City on Friday, according to sources in his campaign. An advance notice about one of his Iowa events was shared online by the Woodbury Democratic Club, with de Blasio's name misspelled. 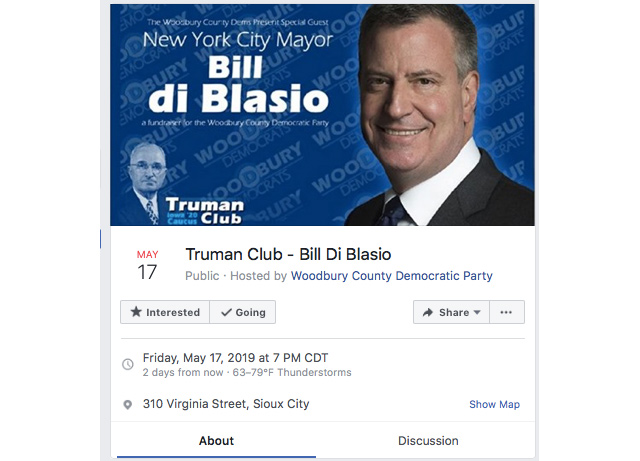 Then Saturday and Sunday he will be in South Carolina making stops in Columbia and Charleston. On Sunday afternoon, he heads to Connecticut for his son Dante’s graduation from Yale University.

De Blasio is entering the race relatively late. With more than 20 Democratic candidates already vying to replace President Donald Trump, de Blasio will be competing with all of them for more than just voters. He must build an organization, raise money and craft a message that resonates across the country, despite little support from voters in New York City. A Quinnipiac poll last month found 76 percent of New Yorkers opposed de Blasio’s possible presidential bid.

Even those who know the mayor best see his decision as one with a clear downside and unclear rewards. Joseph Vitteriti, chair of the Urban Planning and Policy Department at Hunter College and author of The Pragmatist: Bill de Blasio’s Quest to Save the Soul of New York, said de Blasio’s legacy is at stake.

“The risk is that people think he's kind of checked out and he's focused on the next job rather than the current job,” Vitteritti told Gothamist/WNYC before the mayor officially launched his bid.

“That does not serve any mayor well,” he added.

Since the start of the year, the mayor has been using his bully pulpit to unveil policies that bolster his argument that he is doing more than talking about progressive ideas—he’s implementing them here in New York City in a way that could serve as a model for the rest of the country. Most recently he trumpeted environmental legislation that seeks to force city building owners to drastically cut carbon emissions. On Monday, de Blasio held a campaign-style rally in the public lobby of Trump Plaza where supporters of the legislation faced a chorus of pro-Trump protesters who sought to drown out the event. De Blasio plans to position himself as a public executive, drawing on his experience leading the America’s biggest city which currently boasts record low crime and consistently low unemployment. His current stump speech emphasizes the struggles of working people.

“There is plenty of money in this city,” de Blasio has taken to saying, “it's just in the wrong hands,” he adds, arguing people deserve their share of the prosperity that they’ve earned.

But for all his accomplishments, the mayor will also be forced to answer for the issues his administration has failed to address, from the city’s crumbling public Housing Authority, to an ongoing affordable housing crisis and record-high homelessness. Advocates who once saw the mayor as their ally are among the most critical of his presidential ambitions.

“We think it's sort of unconscionable as we have record homelessness in New York City that he still continues to tout a record of housing production through his Housing New York plan when we know that so few of those units are actually going to those who need it most,” Giselle Routhier from Coalition for the Homeless told Gothamist / WNYC a month ahead of the mayor’s expected announcement.

On top of local concerns, the mayor faces an immediate national test just a month from now. That’s the deadline to qualify for the first Democratic debate scheduled for June 26th and 27th in Miami. The mayor is at risk of not qualifying, something that he acknowledged on the Brian Lehrer Show earlier this month.

The mayor has already polled at 1 percent in two Monmouth polls. But he may face fundraising obstacles going forward. Since last July, he has been raising money for a political action committee, the Fairness PAC. While he received money from some top Democratic donors, some of his supporters have already decamped to other candidates.

“I usually support the person who is most electable and who I think is going to be the best campaigner,” Nash said. “Right now, I think it’s Joe Biden. So I’m a Joe Biden guy and now that he’s entered, he’s my man.”

If those types of sentiments make de Blasio an underdog, that’s just where he likes to be.

“He's always done the unexpected, always done what his advisers have told him wasn't a good idea and has managed to come out on top,” said Vitteritti, the Hunter College professor and de Blasio biographer. “If you look at his history it's not out of character.”

#2020 election
#bill de blasio
#de blasio 2020
#mayor de blasio
#politics
#original
Do you know the scoop? Comment below or Send us a Tip