"It Was the First Time They Went Night Fishing" 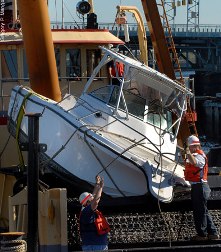 Families and friends are mourning the deaths of Robert Chacon and John Isello, two friends who died when their motorboat capsized in the Ambrose Channel Saturday night. Chacon, Isello and two other friends were on a 24-foot fishing boat when their vessel hit a tugboat's towline.

All four fell into the water. Jackson and Chacon were in an air pocket, but Chacon suffered a heart attack. Jackson, who held onto Chacon's body so it would not drift away, saw a NYPD diver. Detective Francis Vitale saw Chacon's body and told the Post, "As I was pulling [Chacon], all of a sudden, a hand came down and grabbed me on my shoulder, which I certainly wasn't expecting underwater in the dark."

Isello was swept away by the current and drowned. The fourth passenger, Robert Angnali, managed to swim back to capsized boat and sat on its hull before being picked up by another boat, the Captain Dave, whose crew contacted the police.

Chacon's brother told the Daily News, "This was a tragic accident. We're in shock. It was the first time they went night fishing, and they were looking forward to having a good time."

#Ambrose Channel
#As
#As I
#coast guard
#daily news
#friends
#news
#News: NYC
#ny times
#nypd
#police
#radio
#The Coast
#The Coast Guard
#The Police
Do you know the scoop? Comment below or Send us a Tip