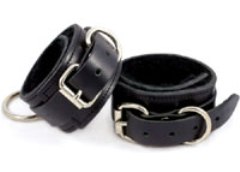 Good news about the man who was found in respiratory distress while suspended from the ceiling at a Midtown S&M club on Friday. The 60-something retired math professor from Montreal woke up yesterday, but he didn't remember the incident.

His wife didn't realize what had happened (she was still in Montreal) and told the Post reporter, who relayed the story, "Oh my gosh, I can't believe this." Wow, to hear about your husband's near-death experience from the Post!

The retiree (named in the Post, but not in the News), was apparently a regular at the Nutcracker Suite, an S&M club on East 33rd Street. He had a choker around his neck, and the choker was suspended by a rope from the ceiling. He was also wearing a hood, nipple clamps and high heeled shoes. His dominatrix had been checking on him at regular intervals, but at one point, his hands seemed blue, so 911 was called. The Post reports that the man "began choking when one of his feet slipped out of the tall shoe." Police are looking into whether to press charges of negligence.

The president of a business in the same building, Janet Benshoof of the Global Business Center, summed up the clientele to the Daily News: "A steady stream of bankers, lawyers, doctors, going to the ninth floor. It was like Guantanamo for sexual deviants. It was Abu Ghraib in Manhattan, but for pleasure." And the man's wife told the News, "He comes down to visit once in a while," adding, "I thought New York was safe."

Image of Kookie Cuffs, which can be purchased at Toys in Babeland