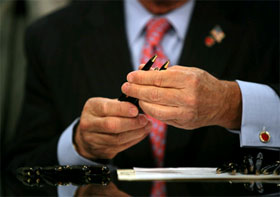 After hours of hearing from the public, Mayor Bloomberg signed the controversial term limits extension bill. The bill was passed by the City Council a week and a half ago, in a vote of 29 to 22. It allows elected officials, including himself and City Council members, to run for a third term.

Most of the unhappiness about the bill is due to the fact there was no opportunity--aside from two days of hearings--for the public to participate, given that voters had decided in two separate public referendums in 1993 and 1996 to limit terms to two terms. There were quite a few people who praised Mayor Bloomberg and urged him to sign the bill, too.

City Room reported on the hearing and noted the words of Upper East Side resident Danny Shapiro, "You’ve ignored us, instead speaking only with either those who are influential or with those who have influence. You say you want to give voters more choice, but not the choice to keep term limits as is." City Room also though the Mayor "seemed subdued, tired and perhaps a bit humbled as several members of the public berated and even yelled at him." Still, he signed the bill after saying:

This is New York City, and you get a diversity of opinion. I’ve thought long and hard about this, and you know that I have, over a period of time, fundamentally changed my opinion in terms of how long somebody should be in office. I have not changed my opinion in terms of the value of term limits. I’ve made a commitment that I will appoint a Charter Revision Commission to look at the issue of whether two or three terms is appropriate, and to put on the ballot the ability for the public to either reaffirm what we have today or to change it.

There’s no easy answer, and nobody is irreplaceable, but I do think that if you take a look at the real world of how long it takes to do things — we live in a litigious society, we live in a society where we have real democracy, and lots of people have the ability to input their views and approve or disapprove projects — I just think that three terms makes more sense than two.

He also pointed out he hasn't been re-elected yet.