Isiah Thomas Gets The Ax...Sort Of 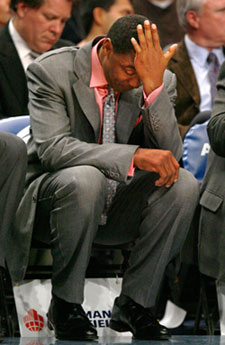 It may have come a year too late, but Isiah Thomas is no longer President or coach of the New York Knicks. Donnie Walsh announced Friday afternoon that he had relieved Thomas of his coaching duties saying, "The bottom line is we haven't won and the team didn't look like it was motivated to try to win and compete. Those were the reasons. A new coach is necessary to change direction of the team."

Clearly, this was a decision Walsh had to make. From his incredibly stupid personnel moves to his stupefying coaching decisions, Isiah had lost the fans and the players.

But before you celebrate too much, Isiah isn’t totally gone. Walsh wouldn’t specify exactly what his role will be, but he remains a part of the organization reporting directly to Donnie Walsh. This may be Dolan’s doing since he made the incredibly boneheaded move of extending Thomas’ contract last March and he doesn’t want to pay Thomas for nothing (wasn’t that already the case?). Considering his performance on the court and his performance in the courtroom, Thomas should have been sent packing. The fact that he is still around is a cause for worry.

For now, let’s put some faith in Donnie Walsh and see what happens with the Knicks. Maybe the name Isiah Thomas will never be mentioned again and Walsh will hire a great coach to get the players going. Jeff Van Gundy is mentioned in the paper today, though it’s doubtful he would want to come back and work for Dolan. More intriguing is the idea of Mark Jackson, a native New Yorker and great floor leader in his playing days, coaching the team. Jackson would be respected in the locker room and embraced by the fans. Perhaps he is just the guy to help Walsh fix this mess.