Isiah is Blowing It Up with the Knicks 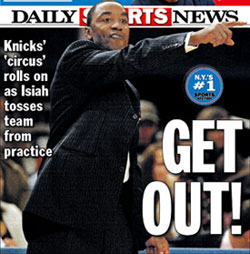 All is well in Knicks camp. They're playing well on the court, fans love them, MSG is packed, all their players are completely sane, and their coach/GM is the talk of the town. Actually, that's how things are in Knicks-fantasy land. Back here on planet earth, the Knicks are a dismal 2-7, sitting at the bottom of the Atlantic Division, their star point guard is coming off the bench, and their coach/GM is throwing his players out of practice.

The Daily News reports that Isiah Thomas kicked his team out of practice yesterday when he was unhappy with their lack of hustle and focus. Players eventually returned, but the Daily News source says that "players were in a somber mood when practice ended." As bad as the Knicks are, maybe Thomas' actions will actually result in a rare victory tonight when they take on the Golden State Warriors, who also have two wins.

There are also reports that players are upset that Thomas let Stephon Marbury play against the Clippers immediately after returning from his one-day absence. Thomas apparently put Marbury's playing time up for a team vote. Despite players voting unanimously to bench Marbury, Thomas played him for 34 minutes. Now that's some good coaching, Isiah!