Is Your Landlord One Of The Worst In NYC?

It's that time of year again. Not Thanksgiving, but the release of the Public Advocate's Office's Landlord Watch List, a time that gets conversation going around the water cooler at housing lawyer and property management company offices alike. The bad news for tenants is that New York is still rife with slumlords.

The website's main attraction is a list of the 100 landlords with the most building violations and open complaints. At the very top is Ved Parkash, who Letitia James's office says owns 11 buildings in the Bronx that together have 2,235 complaints and violations. The buildings contain 720 apartments, meaning the average household renting from Parkash has at least three problems with their apartment that the city is investigating or considers hazardous or imminently dangerous.

Reached by phone Parkash laughed when asked his reaction to being named the worst landlord in New York City.

"Ha ha, nothing is going on my building," he said. "My building are the best."

"You have the addresses you visit my buildings," he continued. "Then you call me back, okay?"

Time did not permit visits to Parkash's buildings, but at 815 Gerard Avenue near Yankee Stadium, for example, the Department of Housing Preservation and Development lists 189 violations for 78 apartments. They include lead contamination, a leaky roof, mold, broken toilets, cracked bathtubs, broken ceilings, defective electrical sockets, and much more.

"He doesn’t want to do anything for us," Ladson said. "He just wants our money. He wants us out so that he can bring new people in and jack up the rent."

The website also lists the buildings in the roughest shape across the city. James's number crunchers include buildings with three serious HPD violations or open Buildings Department complaints per unit or, for small buildings, two.

"Every New Yorker deserves to live in safety and security, and every apartment needs to meet basic standards of decency," James said in a statement. "Unfortunately, unscrupulous landlords throughout our City are failing to uphold these basic rights, creating inhumane living conditions for tenants." 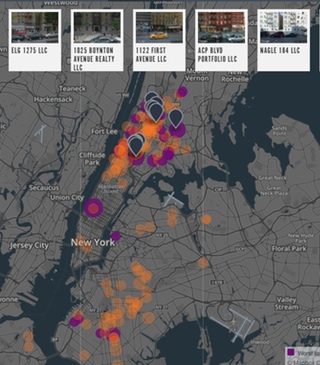 Some lowlights: Brooklyn is the city's most populous borough by a smidge, but has the most brutal-to-live-in buildings by a mile, logging 3,385 slum complexes to Manhattan's 1,166, the next highest borough total. Gentrifying neighborhoods such as Crown Heights, Bedford-Stuyvesant, Bushwick, and Flatbush are especially well represented. Altogether, the city has fewer buildings on the list this year compared to last. The methodology changed this year to include consideration of Department of Buildings violations, so this year's 6,081 distressed buildings citywide fall into a more expansive definition than the 6,732 last year, meaning the amount of squalid housing in the city has decreased somewhat.

The effectiveness of shaming slumlords isn't totally clear. HPD has its own harder-to-navigate lists of falling-apart addresses in various enforcement programs, and building violations are public record. Last year, a public advocate spokeswoman told Vice "at least one" of the landlords listed reached out upon publication of the list to find out what can be done to make things right. Since this year's went up on Monday, no landlords have called, a spokeswoman said.

Still, there have been select stories of landlords shaping up, and the rep said HPD looks to the watch list when compiling its Alternative Enforcement Program list. And there's this, from the Public Advocate's Office:

The website does have its limitations. The data is searchable by address, but not by owner, and the vast majority of the owners that do show up are anonymous LLCs, meaning that it's possible, even likely that Parkash isn't the worst landlord in the city, but rather the landlord who is least careful about creating a new company and registering it to a lawyer or underling every time he buys a new rathole.

The issue of shell companies is a problem much bigger than the watch list, and comes up across the spectrum of issues making New Yorkers' lives worse, including corporate spending on political campaigns, deed theft, and foreign investors warehousing money in empty luxury housing.

Anonymous LLCs are also a real pain for suffering tenants trying to take their landlord to court.

"It’s very frustrating," Legal Services NYC litigation director Ed Josephson said. "People try to sue their landlords, and they can’t even find them. They find out what looks like a real address is actually a post office box."

Another issue that transcends the list but wreaks destruction is the lack of serious consequences for delinquent building owners. For instance, Moshe Piller, the fourth-ranked landlord on the list, has been in legal trouble for the conditions at his buildings for decades, Josephson said, but is still cashing rent checks.

"People on this list may do repairs on a few buildings for a while, but their whole business plan is to suck money out of buildings by not making the proper repairs," Josephson said.

Legal Aid civil law reform head Judith Goldiner said her organization is currently suing three of the four landlords who top the list, which "makes me feel like they’re definitely going in the right direction."

Is your building one of the worst collections of slum housing in New York? You'd be surprised. Check out the list to find out.