Like some frustrated cyclists in NYC, Public Advocate Letitia James is wondering why the Department of Transportation is redesigning streets but leaving out bike lanes. Citing the bike lane-free planned overhaul (PDF) of West Eighth Street between Sixth Avenue and Broadway in Greenwich Village, she wrote to roads Commissioner Polly Trottenberg:

The City must take every opportunity to install bicycle lanes when there is excess width on the street. Wide streets encourage higher speeds, and bicycle lanes, by narrowing the roadway, both protect cyclists and encourage drivers to maintain safe speeds. Bicycle lanes should be the default option when a street is up for a redesign, to be excluded only when community-specific factors make a bike lane inappropriate.

The Eighth Street redesign does include wide parking lanes with cyclists in mind, but that isn't enough to satisfy James. Streetsblog first reported on the letter, and as it notes, recent proposals for Atlantic Avenue (PDF) and Riverside Drive (PDF) also make no mention of bike lanes. A repaving of Amsterdam Avenue on the Upper West Side, and a retooling of Woodhaven Boulevard in Queens to accommodate bus rapid transit also omit bike lanes so far.

In her message, James praises the department's Vision Zero initiative, which aims to reduce traffic fatalities to zero by 2024, and the ambitious Queens Boulevard redesign, which includes separated bike lanes, but questions the lack of bike infrastructure in some new plans. "Given the success of protected bicycle lanes, and the imperative behind Vision Zero to do all that is possible to eliminate traffic deaths and injuries, the City must work harder to bring protected lanes to as many arterial streets as possible," she wrote. (Her claim that no Bronx plans include new bike lanes is false.) 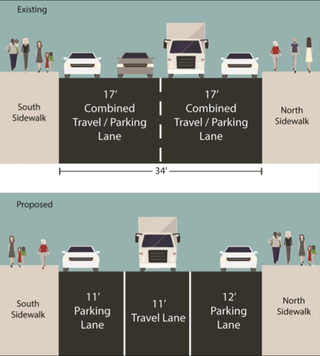 The current (top) and proposed designs for W. Eighth Street. (Department of Transportation)

The Atlantic redesign doesn't excise lanes of car traffic, but the Riverside one does, from two to one in each directions, as does the Eighth Street proposal, from two one-way lanes to one. A protected bike lane with parking between it and car traffic takes up 8 feet of width and works well on a one-or-two-lane commercial street, according to the design manual.

Eighth Street is 34-feet wide and currently has 8.5 feet each for two parking and two driving lanes. Its new configuration includes an 11-feet-wide driving lane and an 11 and a 12-foot parking lane. If the parking lanes were squished to 8.5 feet, that would only leave 6 feet, which could explain the lack of a bike option here. Riverside Drive is a weird beast between 135th and 116th streets, and the manual doesn't recommend any type of bike infrastructure for a wide, two-direction commercial street such as Atlantic Avenue.

Then again, Queens Boulevard is getting the royal cycling treatment and the department is considering separated bike lanes for Brooklyn's Fourth Avenue. So what gives?

A Department of Transportation spokeswoman declined to discuss the specific considerations behind the Riverside and Atlantic overhauls, but said that the focus of the Eighth Street redesign was pedestrian safety, and that planners intend to revisit it to see if a bike lane is feasible. As to the broader criticism, she emphasized that there are plans to create bike lanes all over the place—indeed, there are near-term plans to make them in all five boroughs, and the agency aims to expand the network from 675 miles, its current length, to 1,800 by 2030.

#bike lanes
#department of transportation
#letitia james
#polly trottenberg
#road redesign
#vision zero
Do you know the scoop? Comment below or Send us a Tip