Is This The Subway Car Design Of The Future?

Everyone likes to people-watch in the subway (just don't make eye contact!), but some get paid to do it: Researchers from the NYC Transit Authority observed straphangers over three weeks last year to glean insights into the seating and standing behavior of subway riders. Now, they're publishing the findings in a study in which they offer some suggestions on how to improve our trains.

If you typically find yourself standing near the doorway on your morning commute, you're like most New Yorkers who "strongly prefer to crowd the space between doors." Subway riders are also "overwhelmingly attracted to vertical stanchions (poles)" as opposed to the horizontal poles that hang above seating benches (Thanks for not exposing your underarms for all to see, straphangers!)

The study also confirmed our desire to avoid physical contact with others on the subway: When seating is at 70% capacity, "standing room is already being consumed in a significant way." For a car to use 90% of its seats, the train has to be overstuffed to 120% capacity. Basically, people will take an open seat if it's available, but once the car is even moderately full, we'll spare ourselves the human contact and stand.

In the graphic below, the research team lays out their suggestions for future subway cars. Notably, their final suggestion features a large area in the center of the car with no seats at all. This would allow "longer-distance passengers to gravitate towards airline seats at car ends, and short-distance riders to stand in the middle zone with no seats." If it means we'll have a place to get away from guys like this, we'll take it! 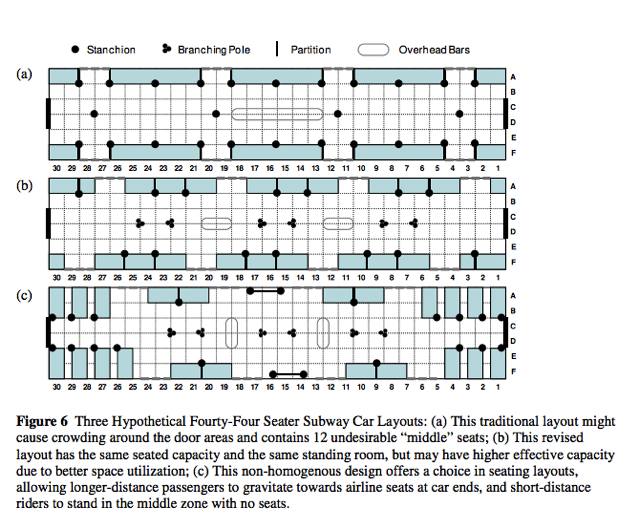 #MTA
#NYC Transit Authority
#research
#seating
#study
#subway
#train
Do you know the scoop? Comment below or Send us a Tip