It's not that we're haters, we just don't have the time to make it to the bottom of most BuzzFeed listicles (when you've seen six Papayas That Look Like Corgis Dressed As Jesus, you've seen all 59 of them). But 37 Ways You Know You Went To Public School provoked interesting questions about what it means to go through The System and how fiercely some of us are willing to defend it.

Every tier of my education was public (I graduated high school in 2004). The author of this listicle is 24, so many of his observations strike me as being accurate, if nostalgia can be "accurate."

Kids were (and still are) bribed with terrible pizza to get them to read (#29). (Sociology grad students: please write your thesis about this). Lunches were notoriously bad (#3-4)—our system even had milk in a bag for a few years until some adult somewhere realized that children aren't great at puncturing holes in moving objects.

My teachers weren't allowed to strike (#25), but my superintendent presided over a dismal 59% high school graduation rate and cover-ups of school violence, which I guess is a metaphor for driving a Mercedes? (#27). Google wasn't ubiquitous (#37), and most of our teachers were incredible (#14-24), except for maybe the ones that beat their students or made us copy our lessons from the blackboard while Osmosis Jones or Independence Day played on a television (thanks, 10th grade Earth Science). 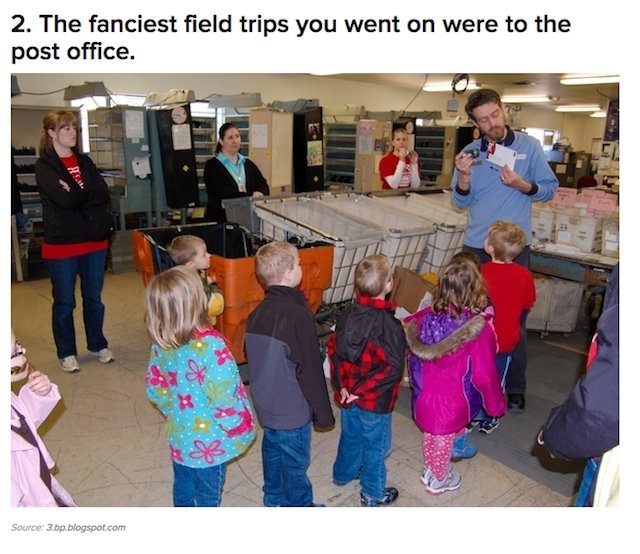 Perhaps the most "offensive" part of the listicle isn't the listicle, it's the sub-headline: "Some of us didn't have the luxury of an expensive education."

Some of us didn't want an "expensive education." And the idea that we can laugh at our crappy public schools while we wonder why obscene learning disparities continue to exist is disgraceful in that "Humanity Is A Disgrace" sort of way.

Our publisher Jake Dobkin, who taught at Stuyvesant High School in 1999 and spent his entire life as a public school student until he transferred from CUNY to Columbia his freshman year (Editor's note: Traitor) called the list "anti-public school, anti-teacher stupidity."

"I know BuzzFeed needs to solicit these kinds of brain-dead listicles to generate their valuation-justifying traffic," Dobkin said today, as he was putting the finishing touches on a crossword puzzle with clues consisting solely of lines from Arthur Rimbaud's letters to Verlaine.

"But surely the cost of one person on staff to read them and make sure they make sense, aren't grossly offensive or unfair, and comport with the values of the site and its staff would be worth the expense?" [Editor's note: Community contributors aren't paid or "on staff."] 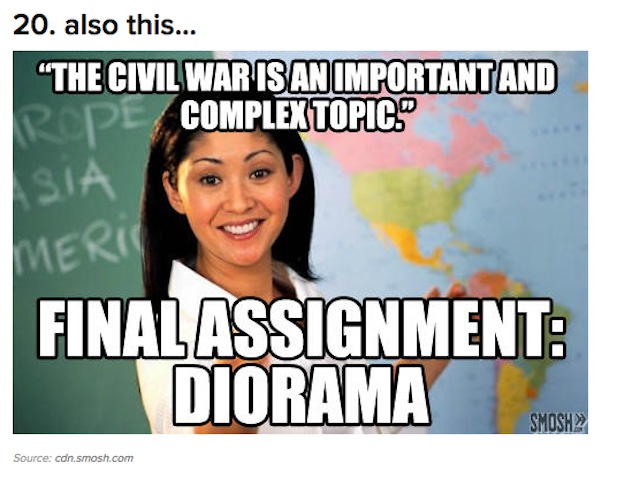 "Drawing is actually learning for 4 and 5 year olds, dimwit (#1)—it teaches fine and gross motor skills, among other things," Dobkin continued. "During my time in Public School, I visited every museum in NYC, as well as the Statue of Liberty, Empire State Building, and City Hall (#2). Where did you go to on your Private School trips, kid? Gstaad?

"This is just some union-busting, Koch brothers-style bullshit. I went to Public School in New York for 15 years, and out of the dozens of teachers I had, maybe 3 could be described as lazy, crazy, or ignorant."

[UPDATE] Jake wondered what Jonah Peretti, BuzzFeed's founder/CEO, thought of the post given that Peretti's mother is a schoolteacher. Here's what he emailed us:

I can see the BuzzFeed post and it is the web equivalent of standup comedy. As a former public school student I can relate and find it hilarious.

My mom was a public school teacher for many years, then she ran a teacher education program at UC Berkeley designed to combat many of the public schools problems satirized in that BuzzFeed post. My dad was a criminal defense attorney so when the public school system failed he would defend the poorly educated dropouts from crimes they may or may not have committed.