Is There a Worse 4-3 Team Than the Jets? 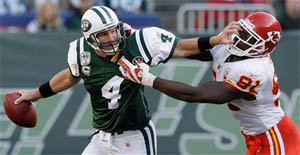 Well, maybe the Ravens. But the Jets, despite their winning record, have looked generally dismal in the past several weeks. Other than its 56-point performance against Arizona, Brett Favre's offense has been mediocre. To make matters worse, their schedule, to this point one of the easiest in the league, is about to get a whole lot tougher. If the Jets don't stop playing down to their competition -- if that's really what they have been doing against the Bengals, Raiders and Chiefs -- the playoff bubble will burst. Favre or offensive coordinator Brian Schottenheimer deserves a lot of the blame. The quarterback is tied for the league lead in interceptions and is putting up worse numbers in almost every category than Chad Pennington. Ouch.

First in the Jets' stretch of tougher opponents is the Buffalo Bills, who are tied for first place in the AFC East after a terrible loss in Miami last week. It's the latest in a season they have been in first since 1998. Trent Edwards, who put forth a real stinker against the Dolphins, has been much better than in years past, but it's an improved defense that has gotten the Bills to this point. The Jets have not played well against the Bills recently -- they've lost three straight and five of seven -- and need a win to stay in the hunt. Injury news: the Bills will be without receiver Josh Reed and defensive end Aaron Schoebel. Unless the Jets can take care of the football -- they have a minus-eight turnover differential in their past three games -- they will be in trouble.

Photo of Brett Favre and DE Tamba Hali by the AP

#brett favre
#football
#jets
#sports
Do you know the scoop? Comment below or Send us a Tip