Is There a Miss Uncongeniality? 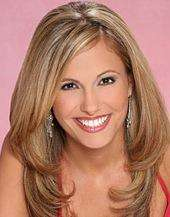 The New York Post is loving the NJ beauty pageant story, which includes allegations that a fellow contestant may have been behind the blackmail plot to get Miss New Jersey to relinquish her crown. Someone sent pageant winner Amy Polumbo a package of photos that were lifted from Polumbo's Facebook account and doctored to include sexually suggestive captions. The Daily News says that there is no breast-baring or drug-taking in any of the photos, but Polumbo will still have to appear before the NJ board of the Miss America competition to determine whether she can keep her crown or not.

The Post plays up the possibility of a fellow contestant being responsible for the blackmail plot and compares the goings-on to when Tonya Harding had ice skating-rival Nancy Kerrigan knee-capped by a goon before the Winter Olympics. Despite statements in the News by another pageant participant saying that Miss NJ had no enemies among other contestants, the Post paints a picture of jealousy and emnity, with the fresh-faced Polumbo an inexperienced newcomer, robbing hardened lifelong beauty queens of their chance to be Miss America.

Pals said suspicion immediately fell on someone connected to the pageant, because she had made enemies among her fellow competitors.

Polumbo was an inexperienced upstart, and her upset victory rubbed some of the jealous hard-core pageant participants the wrong way.

“There was a feeling that she hadn’t paid her dues, that she just got lucky and that she beat out a lot of girls who have been doing this their whole lives,” one competitor told The Post.

The state attorney general's office has become involved in the tiara fight and the FBI has been contacted. Polumbo's lawyer, Anthony Caruso, said that his client is not available for comment at this time and is in hiding with her family.