Is The New $1 Billion NY Islanders Development About To Get Amazon'd?

Even as the New York Islanders confuse their fans with plans to play some home playoff games in Nassau County and some in Brooklyn, the team's ownership has been quietly moving ahead with plans to build a new arena halfway in between, as part of an $1.18 billion project that would include a hotel and retail complex on state-owned land at Belmont Park.

But in recent days, there have been indications that the plan may have hit choppy waters — thanks in part, of all things, to Amazon. Though state officials say the project remains on track for a fall 2021 opening, the Great Amazon Kerfuffle has now earned State Senator Leroy Comrie a nomination on the same Public Authorities Control Board that helped scare off Amazon from Long Island City. And with Comrie insisting that he won't allow the arena to move forward unless the Islanders owners agree to pay for pricey traffic and transit upgrades to the site, this potentially sets up another high-stakes showdown over a major development project backed by the governor.

This story begins way back in 2011, Nassau County voters resoundingly rejected spending $400 million on a rehab of the Nassau Coliseum, the Islanders' home since the 1970s. One year later, then-Islanders owner Charles Wang responded by announcing he'd be uprooting the team from its namesake island and relocating it to the Nets' new arena in Brooklyn—where ever since 2015, the Isles have played to disappointing crowds in an arena specifically designed without hockey in mind.

As the Islanders' new owners, Jon Ledecky and Scott Malkin, have attempted to make the best of a bad situation—most recently by returning to their old home at Nassau Coliseum part-time, a strategy that has pleased no one—they've been moving ahead with plans for a new arena that would literally split the difference between the team's traditional Long Island fan base and the metropolis that first lured Wang. The Belmont Park arena plan was granted preliminary approval by the state-run Empire State Development corporation back in 2017, and has been working its way through the public oversight process ever since, amid persistent protests by community groups who say they don't want the traffic and transit headaches the arena would bring, as well as concerns that the state land being provided for the project could be worth three to eight times as much as the Islanders group's $40 million offer. 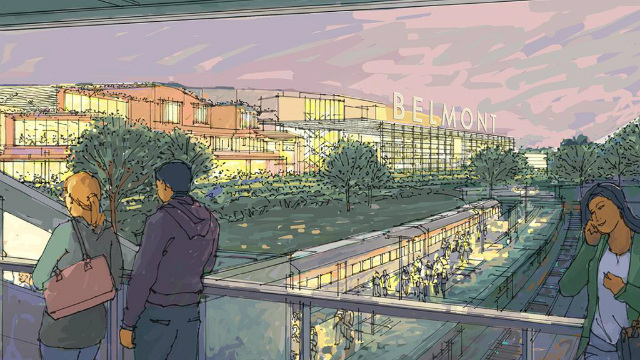 A rendering of the Belmont project (NHL)

The first indication of trouble came last month, when state senator Leroy Comrie, whose district abuts the racetrack site and the neighboring town of Elmont, issued a five-point list of "essential points must be addressed before the ultimate fate of the project is decided." Among Comrie's demands: expanding the part-time LIRR spur to Belmont Park to full-time service to points both east and west, at the developer's expense; expanding the Cross Island Parkway to accommodate additional traffic; and implementing concrete transportation and community hiring plans.

Comrie's letter simmered for weeks without receiving a formal response. (The senator tells Gothamist that ESD privately promised it would look into his concerns.) Then last Thursday—coincidentally or not—ESD unexpectedly announced that it would be extending the public comment period on the plan until March 1st, with the project’s long-awaited its environmental impact statement not set to be finalized until the end of June at the earliest.

This in itself wasn’t technically a change of plans: ESD had previously estimated that the statement would be ready in the second quarter of 2019, so late June would still hit the mark. But the agency had projected that construction would begin in the second quarter as well, which now seems impossible: Once the impact statement is complete, the ESD board, Public Authorities Control Board, and state attorney general and comptroller still need to chime in as well—plus ESD has promised a formal appraisal of the value of that state-owned land once the EIS is complete. All that will take time, meaning any groundbreaking will now have to wait until summer at best.

Or, as Tammie Williams of the Belmont Park Community Coalition, the main local group opposing the arena project, put it: "Now you're telling me that a report is not going to be out till the end of June. But then you still have to put out the finding statement, and then you still have to wait for people to sue your ass."

ESD, for its part, insists that last week's announcement was not a delay, as there was never a formal plan to put shovels to earth before the summer. "Last week, we reiterated the same timeline we’ve had since the beginning of this project, and we still anticipate final public approval in the second quarter of 2019," says ESD spokesperson Jack Sterne. "In the meantime, we continue to explore the possibility of a full-time train station at Belmont."

(ESD did not respond to queries on how long it would take after the EIS to finalize approval by the PACB and other agencies and officials.)

The timeline was further complicated last weekend when senate majority leader Andrea Stewart-Cousins announced that she was withdrawing her nominee for the PACB, State Senator Michael Gianaris, fuming in an open letter to Governor Cuomo that "it is clear that you do not intend to confirm my appointment of Senator Gianaris." (The PACB met last week with its lame-duck Republican senate appointee still seated, and Cuomo's budget director lashed out at Gianaris on Friday, saying that "of course the Governor would never accept a Senate nomination of an opponent" of the now-dead Amazon project in Queens.) Stewart-Cousins' new pick: Leroy Comrie, handing the longtime city pol the perfect platform to raise his objections to the Islanders project, much as Gianaris did with Amazon before him.

Comrie says he doesn't think his requests should be a major stumbling block: “I’m very confident that these are resolvable." Still, he adds, he doesn't anticipate anything being finalized for months after the final EIS is released — and possibly not until "the first quarter of next year."

But meeting Comrie's demands for new public transit, in particular, could be more complicated than it sounds. While the MTA has said it intends to "develop a plan" for full-time service to Belmont Park, the actual geometry of the site's tracks makes that nearly impossible—or at least prohibitively expensive. MTA board member Mitch Pally tells Gothamist that the LIRR had determined that one rehab option would cost $300 million for new tracks, signals, and platforms—a staggering figure for either the MTA or the Islanders owners to cover.

More specific answers to all these questions would presumably be addressed in the project's transportation plan. But despite ESD initially saying it would have one in place by last September, all that’s been produced is a section of the draft EIS released in December that laid out how the project would impact local traffic and transit, but was light on ways to address it; and a set of Powerpoint slides the following month whose highlights included such bullet points as "promote and encourage rideshare, carpool, and transit" and "encourage fans to arrive early and stay late." (ESD says an updated plan will be included in its final environmental impact statement.)

"We still haven't received a transportation plan," insists Williams. And she adds that she doesn’t expect any plan to emerge that involves full-time LIRR service in the near future: "MTA said to us, 'That shit ain't happening.'"

MTA officials did not immediately respond to queries on whether that shit is happening.

Correction: This story has been corrected to reflect that State Senator Leroy Comrie does not represent the district that includes the Belmont development, but the adjacent district. Elmont is represented in the State Senate by Anna Kaplan, who has also called for transit improvements as a condition of the development.

#amazon
#leroy comrie
#New York Islanders
#PACB
#longform
#original
Do you know the scoop? Comment below or Send us a Tip