Is That a Salami in Your Pants or... 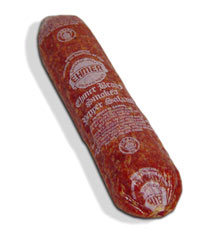 The Post has fun with a story about a robbery at a Brooklyn grocery, as a man stole a number of salamis and was trying to spirit them out in his clothes. Of course, this earns the headline "WURST-CASE SCENARIO FOR THIEF: COPS."

Orlando Martinez was arrested after putting seven salamis "into his trousers and up his sleeves" at a Brownsville Western Beef on Sunday. The assistant manager saw the salami smuggling and confronted Martinez, who then attacked. Martinez was restrained and the "police recovered the salamis." No word if the salamis went directly back into the displays.

And crime and cold cuts is nothing new: Last fall, the NYPD busted a cocaine ring that operated out of a market and other establishments (Police Commissioner Kelly had said, "They could order cocaine with their cold cuts right at the counter.").