Is Stephon Ever Coming Back? 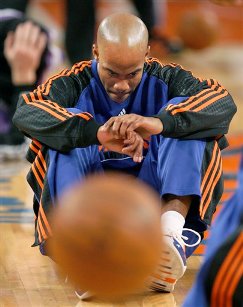 Isiah Thomas brought that question to the forefront yesterday when he responded “I don’t know” to a reporter’s question wondering if there was a chance Stephon Marbury would not come back to the team. The Knicks’ VP for media relations, Jonathan Supranowitz tried to defuse the situation later by saying he had spoken to Marbury and that he would return shortly after the New Year, but the damage was done.

Marbury is obviously having a tough time with the death of his father like anyone would, but the Knicks have gone to extraordinary lengths to help him. Since Don Marbury died on December 2nd, Stephon has appeared in only three games and spent the majority of the time away from the team. The grieving process is a difficult one, but Marbury owes it to the team to either start playing or take an unpaid leave of absence at this point.

Could this be an attempt by Marbury to extricate himself from his increasingly unhappy marriage to the Knicks? It’s easy to jump to that conclusion, but perhaps the way the Knicks are handling this is more telling. Maybe they are hoping that Marbury will simply walk away from it all and retire. Whatever the answer, both parties would probably be better off and happier with a divorce.

Photograph of Marbury by Kathy Willens/AP