June 1st is supposed to be the date that New York City’s Department of Correction stops placing 18 to 21-year-olds in solitary confinement on Rikers Island, making the jail the first in the nation to end isolation, not just for adolescents but also for young adults.

But at a public meeting on Tuesday, the DOC stated that they won’t be entirely eliminating solitary, better known as "punitive segregation," for that age group.

In its place, the DOC is implementing a new “Secure Unit.” That unit, said DOC’s Chief of Staff Jeff Thamkittikasem in his presentation [PDF] to the Board of Correction, will be used for young adults with "the most persistent and violent behavior."

The 56-bed Secure Unit is one of three types of alternative housing intended to permanently replace solitary for young adults. None of these units, which will have a total of 140 beds, were ever formally proposed to the Board of Correction, the agency that monitors conditions and institutes rules governing the city’s jails. If they were, they would have had to undergo a lengthy approval process. The Board would have drafted a multi-page rule allowing its creation, held a public hearing and, after all testimony had been heard, voted on whether to allow them. That’s what happened when the DOC created its Enhanced Supervision Housing (ESH) Unit in January 2015.

Instead, the creation of these alternative housing units was briefly mentioned in the Department’s December 2015 request [PDF] to extend the deadline for separating 18 to 21-year-olds from older adults and address concerns after assaults on jail staff.

Two of those units, the Second Chance and Transitional Restorative Unit, have already been put into place for adolescents; similar units will be implemented for young adults. 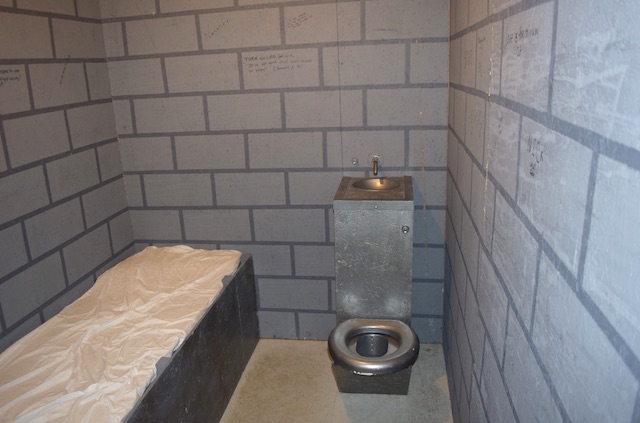 Inside their cells, young adults will be allowed one stamped envelope a week and their personal property will be limited to one book. They must spend at least 28 days in that first restrictive phase before they are reviewed and potentially allowed to progress to the next phase, in which they are allowed two more hours out of their cells and can have family photos.

In contrast to punitive segregation, which now has a 60-day time limit for most rules violations, there is no fixed sentence for the Secure Unit.

Instead, the DOC will utilize what they call a "phased incentivized approach" in which a person must earn their way out by participating in programs. Every 28 days, DOC staff will review the person's record and decides whether to allow them to move onto the next phase or be kept in their current phase. In other words, a person could stay in the first restrictive phase for his entire time on Rikers. According to the DOC, the average length of stay at Rikers in 2015 was 56 days.

As of Tuesday, 38 young adults were in punitive segregation.

"Even if someone behaves perfectly, they can get out in 84 days," argued Riley Doyle Evans, the jail services coordinator at the Brooklyn Defender Services.

Evans also noted that the Adolescent and Young Adult Advisory Board, created by the DOC to help guide their policies and practices regarding these age groups, has repeatedly asked DOC for the unit’s mission, operations and process at their biweekly meetings. But he and other AYAAB members only learned these details at Tuesday’s Board of Correction meeting.

Jennifer Parish, the director of criminal justice advocacy at the Urban Justice Center's Mental Health Project and member of the AYAAB, reminded the Board that, in January 2015, they had voted to end punitive segregation for young adults and that the consequences of isolation last beyond the time spent in those cells. "Young people are suffering," she said. "The scars they suffer may stay with them for the rest of their lives."

Charlotte Pope, a policy research advocate with the Children's Defense Fund, both submitted written testimony and appeared in person to voice similar concerns and urged the Board not to consider the variance without imposing conditions, such as time restrictions on placement.

DOC Commissioner Joseph Ponte said he doesn’t see a problem with incarcerated youth possibly spending the entirety of their stay in relative isolation, noting that each person will be told how they can work towards getting out of the Secure Unit. “If they choose not to participate in the program, then they know that they won’t get out of the unit,” he told the Board.

#doc
#Joseph Ponte
#Rikers Island
#solitary confinement
Do you know the scoop? Comment below or Send us a Tip