Is NYC Squandering Affordable Housing By Selling Tax Debt To A 'Multinational' Bank?

Every year since 1996, when springtime rolls around, the New York City Department of Finance has ordered thousands of delinquent property owners to pay their outstanding property taxes, bringing hundreds of millions of dollars into city coffers. Three months of written warnings from the city culminate in the annual tax lien sale—a one-day event in May where the city sells off the right to collect outstanding property, water and sewer fees to a private trust managed by the Bank of New York Mellon.

The motivation for the tax lien sale, from the city's perspective, is to quickly make back a portion of what it's owed on an annual basis. A Giuliani administration legacy, it is, in dollar figures, successful: since 2008 the city says it has made about $480 million off each sale, plus an additional $350 to $400 million in last-minute payments from property owners who are afraid of private intervention.

The sale "remains critical in ensuring collection of property taxes and, in turn, funding important services in the city budget," said Mayoral Spokeswoman Freddi Goldstein in a statement.

But there's also evidence that the sale—which the city says has included an average of 4,600 properties per year since 2008—is perpetuating a cycle of apartment neglect and tenant abuse, primarily in low-income communities of color. Once debt belongs to the private trust, interest compounds rapidly and, for many property owners, becomes untenable.

A recent report from Public Advocate Letitia James's office focused on 22 multi-family buildings that have entered the tax lien sale an average of five times since 2010. Many of these buildings, from Crown Heights to the South Bronx, are rent stabilized—part of the city's dwindling stock. They have fallen into severe disrepair, and have vacancies.

Carmen Vega-Rivera, 62, lives in one such building in the Bronx. 888 Grand Concourse has been through the tax lien sale twice since 2013, according to James's office. The building has outstanding liens totaling $333,703, and a foreclosure sale is pending. The owner, Tiny Fiesta Realty Associates, represents the estate of the late Louis Bombart, who was on the public advocate's Worst Landlord list before his death in 2015. Bombart's family has owned the building for over two decades, and has a history of neglecting building repairs (Tiny Fiesta could not immediately be reached for comment).

"The roof is caving in, we have leaks between the walls, it just goes on and on and on," Vega-Rivera told Gothamist. "The elevators go out of order and I am disabled," she added. "I've had to cancel my [doctor] appointments. If I'm in the lobby when it goes out I have to wait for someone who can help me with my walker."

In the gentrifying South Bronx, even a debt-ridden building can be attractive to a wealthy real estate flipper. "All these speculators are swimming around like sharks in the builiding," Vega-Rivera said.

This month, the City Council is poised to renew the tax lien sale for four more years, with several minor adjustments. According to housing advocates, the amended tax lien sale guidelines represent a missed opportunity for the city to interrupt the cycle of neglect, and divert buildings like 888 Grand Concourse into a nonprofit trust that could preserve affordable apartments in the midst of a housing and homelessness crisis.

At a City Council hearing on Wednesday, Public Advocate James urged the city to be more creative.

"We need to find ways for the tax lien sale not only to generate revenue for the city, but to create affordable housing," she said. "Failing to use every tool at our disposal is a dereliction of our duties." 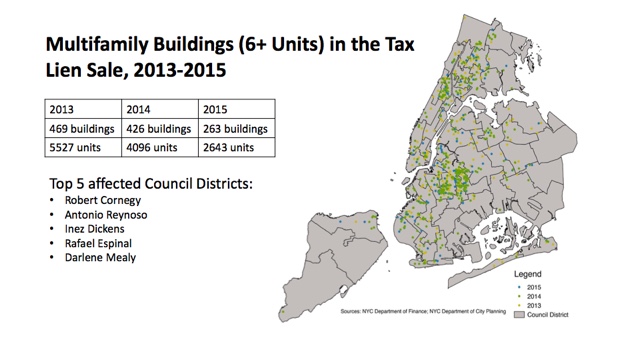 Multi-family buildings in the lien sale, representing thousands of apartments, are concentrated in low-income communities of color. (via New York Communities For Change)

The Department of Finance and the Mayor's Office argue that the lien sale is successful because it prevents foreclosures. According to the DOF, out of 41,400 liens sold between 2008 and 2016, only 354 properties foreclosed. Only 158 of those, less than one percent, were residential properties.

"I think the emphasis on foreclosure rates is distracting," countered Cea Weaver, research and policy director for New York Communities For Change, a grassroots organizing group. "I think it's missing the full picture of what's actually happening, because you are not catching the buildings that are sold to new, speculative landlords. You are not capturing the buildings that are falling into worse condition."

Proposed amendments to the lien sale focus on improving communication between the DOF and property owners who owe taxes: more warning phone calls and emails. The city is also calling for more flexible debt-payment plans—monthly, as well as quarterly—and access to financial counseling for at-risk property owners.

"We have put a number of significant measures in place that have improved payment plans and increased mailings and community outreach, to not only reduce the number of properties in the lien sale, but to remove them during the process," said DOF spokeswoman Sonia Alleyne.

What's lacking, advocates argue, is the creation of a so-called "preservation trust," which could purchase the debt on some of the buildings in serious disrepair and, unlike the Bank of New York Mellon, work with building owners (or, in a foreclosure situation, nonprofit developers) to preserve affordable rental units.

"Is there is a policy reason we're not selling these liens to a not-for-profit instead of a bank?" James asked the DOF on Wednesday. "A corporate bank? A multinational bank?"

The Department of Housing Preservation and Development currently has a system for exempting certain heavily distressed buildings from the sale. However, once they're diverted, there's no guarantee that they'll get the rehabilitation attention they need. The public advocate's proposed preservation trust could pull in all of those buildings, advocates say—an estimated 400 buildings per year, containing more than 5,000 units of potentially affordable housing.

Even more buildings could be rehabbed if the city were to expand the definition of "distressed" to include those with an average of at least three hazardous violations per apartment, rather than the current five. Or, exempt all buildings that have been through the lien sale at least once.

The public advocate's office said it is in touch with possible outside funders for a preservation trust, but declined to elaborate citing the ongoing nature of these conversations. The goal would be to pay off liens at about the same rate, and on the same schedule, as a private, for-profit trust would.

The catch is that unlike a for-profit trust, the preservation trust would need city funding to rehabilitate the buildings—somewhere between $10,100 and $91,500 per apartment depending on the preservation fund being utilized, according to the Independent Budget Office.

But Legal Aid attorney Ellen Davidson, who represents tenants, argues that HPD's preservation funds were established for a reason—after all, Mayor de Blasio has pledged to preserve 200,000 units of affordable housing in a decade. "We know from the city that HPD has a number of preservation opportunities, but in this overheated market they have difficulty attracting developers," Davidson said. "So here's a moment where the city has leverage, and they are currently forgoing it." 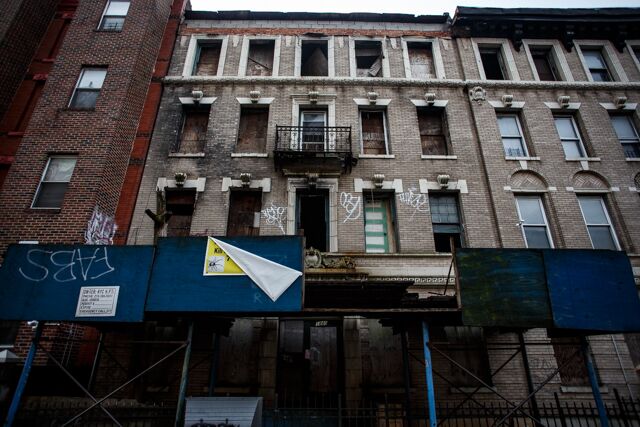 Molly Park, HPD's Director of Development, testified before the City Council this week that the city is not opposed to using the tax lien sale to target more distressed buildings than it has in past years. In 2015, 124 buildings pulled from the sale got rehabilitation funding. Last year, 74 did. An additional several dozen of the most in-debt buildings, with about 255 apartments across them, are pulled into the Third Party Transfer program each year. (Park called this last option "extreme," as it involves foreclosing on the property and bringing it under city control.)

"We are creating a capital-'P' Program," Park assured, adding, "we will pull [buildings] from the lien sale and track them into HPD loan programs."

But advocates argue that any ground rules for rehabilitating more in-debt buildings should be set into law, rather than left up to HPD's discretion. "I've always been of the opinion that it's best to codify programs to preserve them to survive [multiple] administrations," James said.

DOF Commissioner Jacques Jiha did not commit to the "preservation trust" proposal during Wednesday's hearing. "From our perspective, we have an obligation to collect," he told the public advocate. "If we fail in our mission, it's your right to come to me and say, 'You are not collecting the taxes.'"

"What really bothered me is they don't realize that this is people's lives," Vega-Rivera, the Bronx resident, said after the hearing. In addition to the busted elevators in her building, she's staring down a midwinter without heat or hot water. "We are not numbers," she added. "We are people."

#affordable housing
#department of finance
#letitia james
#private trust
#tax lien sale
#original
Do you know the scoop? Comment below or Send us a Tip