Is NYC Ready For A 10-Cent Plastic Bag Fee?

For seven years, proposals for a bag tax in New York City have floated around City Hall like a Duane Reade bag with a German accent. Now a group of City Councilmembers want to pass the tax by April 22nd, which also happens to be Earth Day.

The law would require retail and grocery stores to charge 10 cents per each plastic and paper bag used, or face fines of $250 for the first violation, and $500 for subsequent offenses. If the bill is passed in April, enforcement would begin in January of 2016.

"We don't want you to pay 10 cents. That's not what this is about," Councilmember Margaret Chin said on the steps of City Hall yesterday. "We want to help everyone in the city to make the easy shift to use reusable bags."

Chin was joined by other members of BagItNYC, environmental advocates, and fifth grade students, as well as Councilmembers Brad Lander, Donovan Richards, and Public Advocate Letitia James, who all support speedy passage of the bill.

Councilmember Antonio Reynoso, who chairs the Sanitation Committee, said that plastic bags are "an absolute nightmare" for the sanitation system.

A representative from Sim's Recycling, the company which New York City contracts for curbside recycling echoed the point: "We have literally millions of dollars of equipment for the sole purpose of getting plastic bags away from the recyclables that we want." (Plastic bags can be recycled, but not curbside—they can and should be brought back to retail stores for recycling. Most NYC supermarkets have bag recycling bins by the front door.) 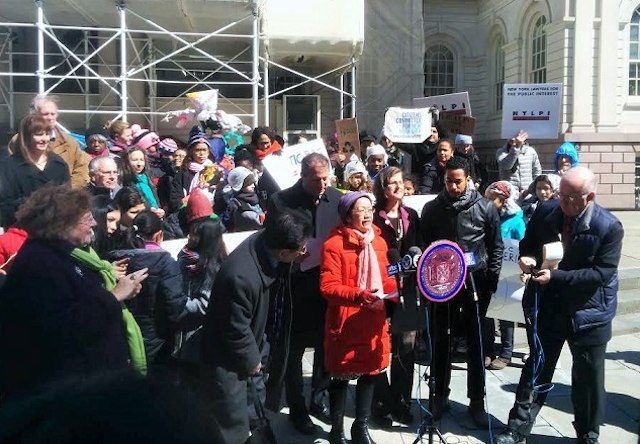 Critics of the bill say that the fee will be a burden for low-income New Yorkers. The Baptist Ministers of Greater New York issued a statement noting that "ten cents a bag adds up quickly for families below the poverty line." Rev. Anita Burson, a coalition member who gave the invocation at Speaker Mark-Viverito's State of the City this year, added, "I'm committed to supporting environmental measures that don't disproportionally penalize low-income families."

Students from the Brooklyn New School and P.S. 34 were strongly in support of the bill. "Plastic bags might pollute the air and we may never see the sun again," warned one fifth grader (sorry kid, it may be too late for that).

The BagItNYC coalition has also produced an interactive map showing Instagram photos of plastic bags hashtagged with #BagItNYC. Photos of the lonely litter are attached to information about that district's city Councilmember and whether he or she supports the bill.

Lander said he was "optimistic" that other Councilmembers will sign on and pass the bill by Earth Day.

#earth day
#environment
#global warming
#original
Do you know the scoop? Comment below or Send us a Tip