Is it the End for Mike & the Mad Dog? 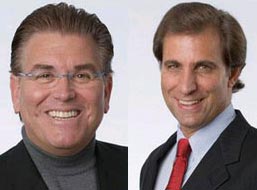 Over the weekend, Newsday reporter Neil Best suggested the wildly popular and successful 'Mike and the Mad Dog' radio show could be finished. According to radio industry sources, Mike Francesa and Chris "Mad Dog" Russo haven't been getting along well enough to continue their afternoon program on WFAN.

While Russo and radio station WFAN, deny the rumors (Francesa refused to comment), Best cites staffers witnessing the pair fight and "subtle" signs "such as Francesa declining to ask Russo how he is after Russo had opened the show by inquiring into Francesa's well-being." Russo said to Best, "I think we've been going through [some strains]...I think we've been fine the last couple of months."

Why would the pair, who reportedly make over a million each, leave? Perhaps to pursue other opportunities--for instance, Francesa hosts "Mike'd Up," an Sunday at 11:35 p.m. sports program on WNBC. Newsday's Jim Baumbach is embarrassed to love listening to Mike & the Mad Dog and, back in 2006, ESPN's Bill Simmons watched the pair and noticed all sorts of weird things.

#Chris Russo
#Mike & the Mad Dog
#mike francesa
#radio
#wfan
Do you know the scoop? Comment below or Send us a Tip