Is It OK To Smoke In Your Apartment Building Hallways?

Living in a city as big as New York, packed into tight walk-ups with nothing but two pieces of flimsy drywall and newspaper separating you from other noise-generating humans, is bound to create some tensions. Native New Yorker Jake Dobkin likes to weigh in on these tensions from time to time, like whether or not to rat out your outgoing shitty roommate, or if it's unethical to charge a bunkmate more than their fair share of rent. But what about the delicate issue of indoor smoking?

EV Grieve shared the above contentious poster exchange between two residents of an Avenue A apartment building. Sign one reads "Stop smoking in the hallways please! It stinks!" This prompted the verbose rebuttal: "Yeah, all right. Guess what? You uptight whiney little punk. Instead of my cigarettes I'm going back (exclusively) to my old favorite — cigars. Just to piss you off! I suggest you either relax yourself and chill out or move back in with your parents (who are probably paying your rent anyway). Ya' punk!"

Who is right? In response to a question on noisy neighbors, Dobkin had this to say:

You could, of course, try more worldly solutions, like writing a polite note, and slipping it under the door. Or, when that doesn't work, calling 311 to narc on them repeatedly. Or when they find out that you've been doing that, and just make more noise to get even, banging on the ceiling repeatedly with a broomstick...But none of that will cure your underlying problem, which is your inability to relax and your tendency to externalize your anxiety by blaming others, and so you'll just find yourself getting upset about some new thing.

But Noise, though annoying and disruptive, is not demonstrably deadly. Second-hand smoke, on the other hand, is a serious health threat, both in the short-term and long-term. And it smells vile.

An incident unfolded in my own apartment building in Brooklyn this past winter after some new tenants moved to my floor. We have an older woman who lives across the hall that likes to chat on the phone and smoke cigarettes on the top landing. It quickly became apparent that the newcomers had a problem with that: 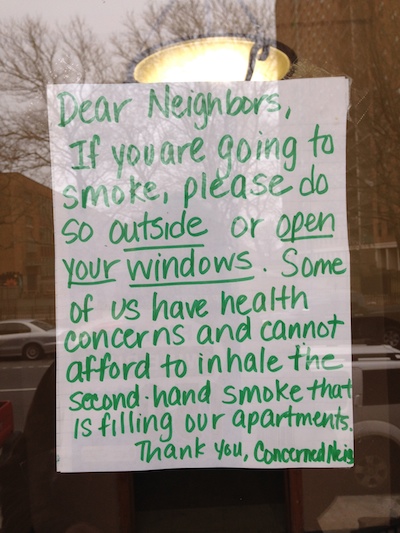 As a tenant living almost directly outside from where this smoking occurs, I can attest to the power of the fumes seeping into my apartment. Then again, as a former smoker, I never said anything, and decided almost instantly that I would never say anything about it, barring some kind of all night chain-smoking house party.

Ultimately, the sign was taken down and mostly ignored. I did notice a decrease in the amount of smoking that took place. But I also felt a little put-off by the whole non-exchange. These folks just moved in and started imperiously throwing their weight around. The implication was that we are here now, and we need things to change because we are here, now, and do not want to tolerate this. I wonder if they even knew our neighbor's name, or had spoken with her at all.

So here is where context matters. Despite the surface similarity of these two smoking situations, they actually differ significantly. In short, if push came to shove I would feel comfortable confronting my neighbor, as I'm on friendly terms with her and others, and think that she would hear me out, at least avoid smoking when she knew I was home. On the other hand, judging by his response, the smoker in the East Village sounds a tad difficult to reason with.

But as a former smoker, probable gentrifier and textbook Catholic guilt tripper, I couldn't bring myself to make it an issue with my elderly neighbor, despite my health concerns. This position was solidified with the discomfort brought on by the new tenants' impersonal public plea for the smoking to cease, which managed to obscure their very real and pressing health concerns with their own tone-deaf and inconsiderate actions. And what's the point of underlining passages at random? Someone should leave them a note letting them know how stupid that is. Or maybe we can all try to bring back the old school style of verbal communication IRL LOLZ.

#apartment
#east village
#etiquette
#new york
#smoking
Do you know the scoop? Comment below or Send us a Tip