Is Hope on the Way Out in Williamsburg? 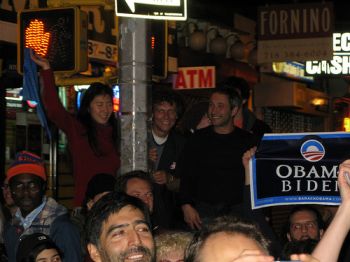 Just when you thought hope was on the way, the NYPD comes to beat it out of you. Silly, silly cops--when will they learn that everything is caught on camera(phone)? Unsurprisingly, more and more video footage from the Election Night arrests on North 7th and Bedford in Williamsburg has found its way online. There's shoving with riot gear, excessive force, swearing, smashing of cameras and phones and a lot of pent up anger being taken out on celebratory Obama supporters (see below, and after the jump).

More information about those arrested is also coming out. We talked to one girl who was taken in for flipping a cop off; while she was given a ticket for disorderly conduct, her story has a bit of a happy ending. Forced to leave her bike behind as she was handcuffed, she just found it on Craigslist where the good samaritan offers to bring it back and writes "I took your bike when the cop with it had no idea what to do with it."

Meanwhile, Ben Lord (who is shown being arrested in one of the videos), tells us, "they tried pushing through a felony charge but it got dropped to a misdemeanor class A...plus three counts of disorderly conduct. They were going to let me out after about 4 hrs when I was just at the 94th, but then the cop came in complaining about his broken finger and I was put back in the cell." And allegedly an arresting officer was heard saying: "Everyone's just pissed because our taxes are going to go up" (one was even wearing a McCain/Palin shirt down in the precinct).

More after the jump, and you can let the 94th Precinct's Finest know how you feel about it all at their next monthly meeting on November 17th.

Here the cops are being cheered on, however chants of "I Love You" quickly turn to "Don't Tase Me, Bro."

Ben Lord, the first arrest of the night.