The common refrain among Citi Bike haters is that it's not the concept of bike share they loathe, but the ungainly and excessively sprawling bike share racks that have descended suddenly from the heavens and turned once scenic neighborhoods into alien incubation sites.

Well, guess what? Hoboken is getting a bike share program, too. Yup. And by all accounts, their bike share program will be better than ours. Rather than huuuge stations holding nearby residents hostage in their own buildings, Hoboken's bike share, operated by a company called Social Bicycle, has zero stations. You can lock them anywhere. They're GPS enabled, and they're cheaper and they make ice cream and THEY FLY. In short, Social Bicycle is perfect. 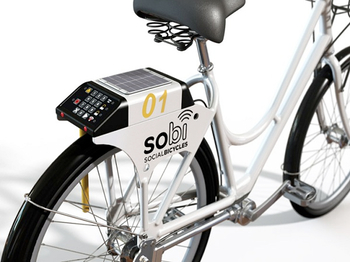 SoBi works like this: The bicycles have built-in locks, enabling customers to leave the bikes at any old rack, preferably within a designated hub—a radius of a few blocks in which the bikes will primarily be available. However, cyclists would have the option of leaving the bike outside the hub zone for a small fee. GPS and "smart locks" allow customers to locate the bikes on their computer or phone.

"At its core, instead of having a smart dock, it would have a smart lock," SoBi CEO Ryan Rzepeck told us. "It removes the need for that expensive infrastructure that takes up a ton of space."

SoBi will launch a 25-bike pilot program in the pint-sized city starting on June 1, and will expand to around 300 bikes in the coming months. The company also has a contract in Tampa for 300 bicycles, and a program for 500 bicycles is pending city council approval in Phoenix.

Rzepeck, a former DOT employee, said he put in a bid to run the city's bike share program but was, tragically, beaten by Alta Bicycle Share, the company responsible for building out the Citi Bike infrastructure. (SoBi came in second, he said.)

While Rzepeck said he doesn't begrudge Alta for winning the city's contract, he hopes his program has a place in New York soon. "It’s a really tough political animal to get anything done here, and [Alta] has done a lot of things really well," he said. "But I built this product with NYC in mind. I tried to find a model where it would work here."

Rzepeck said that in addition to quibbling (OK, lawsuits) over the location of the racks, New Yorkers will inevitably become irate with the process of redistributing the bikes from rack to rack, given the already-crowded nature of the city's streets. Furthermore, Rzepeck said, Citi Bike was a very costly expenditure for Citi Bank, which will complicate the potential for growth in the outer boroughs. SoBi, on the other hand, is one-fifth the price of a station-based system.

Which is precisely why Rzepeck said he hasn't given up hope on bringing SoBi to NYC just yet. He said his company would dovetail quite nicely with Citi Bike, implementing the program in places like south Brooklyn or the Bronx, places that likely won't be seeing a Citi Bike station anytime soon.

"The mayor is encouraging technological innovation in New York City," Rzepeck said. "It would be great if we could have the opportunity to do something here."

Update, 5:25 p.m.: The DOT responded to our request for comment with the following:

Our system is designed to keep the bikes secure and available to users in designated locations throughout the network, which is important for the system’s purpose of short trips and connectivity to transportation modes. The system provider for NYC was selected through a well-publicized RFP process.

Eunice Dwumfour was a 30-year-old Republican from Sayreville, NJ.

Eunice Dwumfour was a 30-year-old Republican from Sayreville, NJ.