Is East New York The Next Bushwick?

Like nearly half of households in East New York, Janice D. is on some form of public assistance. A sheriff from the city's Housing Authority recently evicted her from her NYCHA apartment, and while she contests it with the city, she calls her friend's couch home.

Ask Janice D. to name a significant difference between Mayor Bill de Blasio and his billionaire predecessor and the talk turns to poverty.

Mayor Michael Bloomberg was "good for the city as a whole" but "he had no concept of the poor," she said. "We didn't exist for him."

Mayor de Blasio's arrival here in April to break ground on Livonia Commons, a complex of affordable housing units approved under Bloomberg, was an encouraging sign.

Bill de Blasio "doesn't forget about us," she said. She didn't recall Bloomberg—or any Republican for that matter—ever setting foot here.

The mayor has even chosen a single square mile in Cypress Hills, a subsection in the northeast section of East New York, to be the first of 15 sites slated for development under his $41 billion affordable housing plan, which is supposed to build or retain 200,000 affordable units in 10 years.

But in a district where the area median income is around $32,000/year—one of the poorest in the city—residents like Janice likely won't be able to live in those "affordable" units. And for all its promises, Mayor de Blasio's strategy for building affordable housing looks an awful lot like Mayor Bloomberg's.

"It will please big developers while offering a sprinkling of housing," says Tom Angotti, a professor of urban affairs and planning at Hunter College and the Graduate Center, referring to de Blasio's plan. "It's no different than Bloomberg's plan to upzone wide areas for high-rise development and then get a little bit of affordable housing to win over the community." 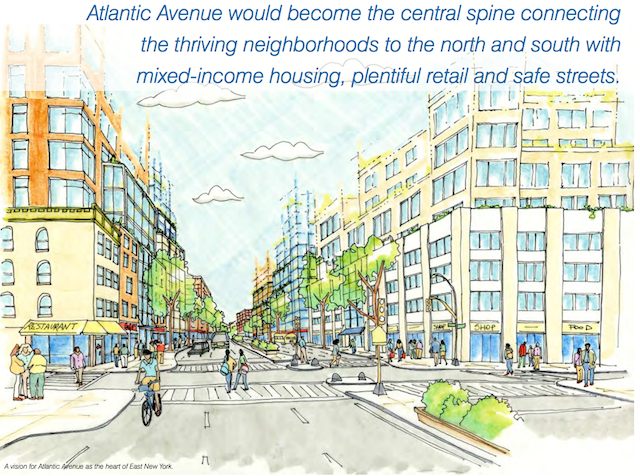 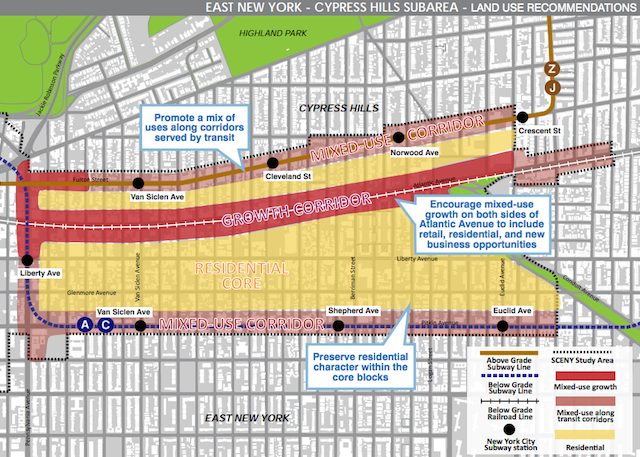 While de Blasio's plan pledges to address the long-term affordability crisis in the city for all New Yorkers, it has set income thresholds that are daunting for East New York's 164,000 residents.

"As it's written, the [citywide] unit percentage breakdown amounts to a median rent of between $1,050 and $1,670, with 8% of the 200,000 units for rent at $630," says Shai Lauros, the director of community development for Cypress Hills Local Development Corporation. Lauros has been working with city planners on de Blasio's initiative, and is calling for a deeper and more realistic level of affordability.

"Affordable rents for this community typically range from $375-625, so there is a discrepancy here," Lauros said. "This could contribute to displacement."

While displacement is vaguely touched upon in the mayor's housing proposal, as a candidate, de Blasio made "Transit Oriented Development" a basis for his strategy to revitalize communities through "rezonings and development of additional housing to locations with strong transit connections," and "encouraging higher-density development at and around transit hubs." Broadway Junction in East New York fits that bill, and these goals remain in the mayor's plan for the neighborhood, called Sustainable Communities: East New York.

The HUD report adds that "recent research confirms that walkable, transit-oriented communities nationwide are becoming increasingly less affordable and have varying benefits depending on the income level of the residents."

Explicit references to Transit Oriented Development have since been scrubbed from de Blasio's campaign website.

Even before the mayor announced his housing plan, the Sustainable Communities initiative was eyed with suspicion because East New York is within walking distance of gentrifying Bushwick.

The mayor's initiative proposes to rezone an area around the A/C and J/Z lines, which can get commuters to Manhattan within half an hour. As one community board member told City Limits last year, since Bushwick is the next stop off the J and L lines, it "just reeks of gentrification."

"Who the plan is likely to bring into the neighborhood is anyone's guess," Angotti said. But he added, "the general trend is a wave of tenants moving out of recently gentrified neighborhoods like Williamsburg, or Bushwick."

A merchant told me several months ago that "scores of more whites" have been seen since the beginning of the year (91% of East New York residents living in the area targeted for development are black or Latino). NYU tote bags have already been spotted by Ulysses Alonso in the Cypress Hills section of northern East New York.

Alonso tells me he is part of the first Mexican-American family to own a brownstone along Bedford Avenue in Bedford-Stuyvesant. His family sold it for $1 million before moving to East New York several years ago. It's now worth triple that, he said, sounding somewhat dismayed.

But it was Luis Wigdorsky who stood out on a recent morning here as Richard Florida's quintessential creative type, and a representative for the kind of New Yorkers who may be eyeing East New York as a more affordable neighborhood. Wigdorsky, an installation artist and photographer, used to live in Greenpoint, and came looking for cheaper rent and more space.

In Greenpoint he rented a basement for $1,000 a month. Now he's got a studio with windows and more space for the same price not far from Fulton Street, one of the commercial corridors on the mayor's list of rezoning sites.

A network of bike lanes, part of the Sustainable Communities initiative, are also in the works. The Long Island Rail Road station long left to neglect is also due a makeover, to link the area up with regional transit hubs.

Still, his other artist friends in Bushwick are staying behind for now. "Their perception is that East New York is still dangerous," he said. 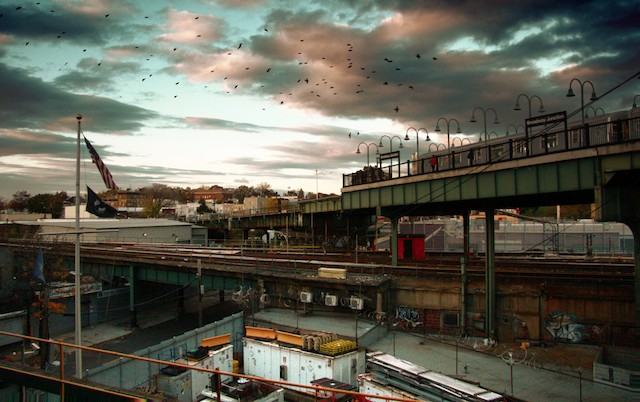 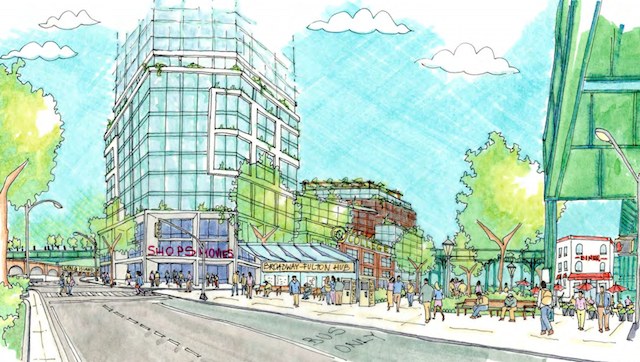 It's not a dream shared by Inez Barron, a City Councilmember for East New York and the outspoken wife of ex-Black Panther Charles Barron: "We are not going to have buildings stacked up like Manhattan."

East New York, she said, needs housing for teachers, firefighters, and the very poor—not overdevelopment in the style of Atlantic Yards, a project that promises 50-story towers and was strongly supported by de Blasio. "We are not interested in reconfiguring the landscape of East New York."

Yet that's likely what East New York will experience.

While the mayor's housing plan is anchored around MIZ, which requires developers to build affordable housing in exchange for density bonuses, it offers tax breaks, such as the controversial 421-A program, and additional tools to "incentivize" developers. These developers can even build their affordable units off-site, far from the Transit Oriented oasis enjoyed by more fortunate tenants, so long as it's somewhere within the district boundaries.

"We have seen this with 100 percent market-rate projects and we will see it with new developments that include a mix of market-rate and affordable units," McKee said. "The greater the number of affordable units, the more you mitigate the negative impact, obviously, but you cannot avoid it entirely."

McKee says a better approach to tackling the affordable housing issue would be to build more public housing, which is almost an impossibility, he said. Reviving the Mitchell-Lama model is another option, but is also highly unlikely.

Jeffries, who called gentrification a "malignant tumor" in his State of the Borough address earlier this year, said he is relaying these concerns to the de Blasio administration.

How lawmakers like Barron and Jeffries can stem such a tide remains to be seen. The area in northern East New York awaiting large-scale development just briefly touches Barron's district. Almost all of it falls within the boundaries of City Councilmember Rafael Espinal, long-time ally of the disgraced Vito Lopez and someone who is very friendly with developers.

The councilmember's 2013 election campaign was heavily backed by landlord groups and the most powerful real estate lobby in the state, the Real Estate Board of New York (REBNY). REBNY, which endorses the mayor's housing plan, also goes way back with de Blasio's pick for chair of the Department of City Planning, downtown developer Carl Weisbrod. 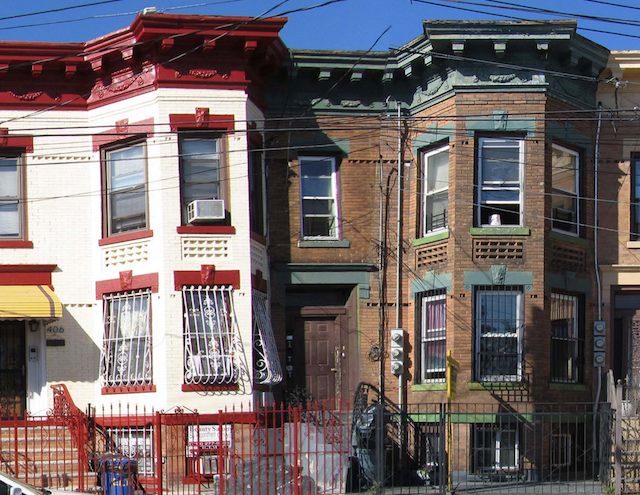 "We are not interested in luxury housing that is out of reach to the people in East New York," Rep. Jeffries says. "We want affordable housing defined at all levels."

What those levels will be in East New York under the mayor's plan is still unclear. There will be debates over land-use specifics, and the MIZ mechanism hasn't been defined yet either, but the breakdown is expected to resemble the one set for the entire city, seen below. 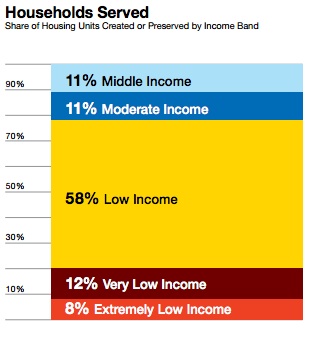 Purnima Kapur, the executive director for the Department of City Planning, said in an interview that her agency was well aware of concerns about East New York's dire need for more affordable housing, and that the city has commissioned a study to examine "what it is that market can support in terms of how much affordability we can ask from a private developer."

"We fully understand that 80% of the AMI [Area Median Income] is not where East New York residents are today," she said. "What works in Greenpoint and Williamsburg does not work in East New York."

When asked specifically if the city would tweak East New York's income levels to provide more affordable housing, Kapur replied, "It will be tweaked in a way that it works for every neighborhood that we are going to be doing these plans with."

Kapur, who has worked at DCP since 1989 and was the head of the agency's Brooklyn office during the Bloomberg administration, also spoke of East New York's need to become more "economically integrated."

She continued, "You clearly do not want to disturb the balance to a point where the neighborhood changes completely, but we want to gradually upgrade amenities and services, and bring the people who are there along in that process. We will be working towards bringing in new development that has a mix of income levels, that caters to the 30% of the AMI, as well as 80%. And hopefully the 120% and 130%, which we hope will become part of this mix."

In the meantime, Janice told me that she'll continue to fight her eviction in housing court. But her choices are stark: go back to the shelter, which she calls "terrible," or try and apply for one of the 800 affordable units at Livonia Commons, which is scheduled to open in 2016. In 2010, a similar affordable housing development received 15,000 applications for 43 apartments.

But Janice isn't even eligible for a unit at Livonia Commons, as the minimum income threshold for individuals is $18,823/year; for a three-bedroom it's $27,806.

The mayor's affordable housing plan consider's Janice to be "extremely low income," meaning that only 8% of the units built or preserved will serve people in her income bracket.

Gerard Flynn is an investigative reporter living in New York.