Two years after Mayor Bill de Blasio announced his plans to build 80,000 units of affordable housing and “preserve” another 120,000 within 10 years, how is he doing on that goal? One way to answer that question: Very well if evaluated by a Clintonian metric of what’s possible within political and financial limits, but not so good by a Sandersesque standard of how much it’s helping to house the more than 3 million New Yorkers who earn less than $20 an hour.

Meeting the plan’s goals would require a pace of 16,000 units built and 24,000 preserved every two years. As of March 31, the city is ahead of pace for preservation.

According to figures from the city Department of Housing Preservation and Development, about 14,000 new units had been built and more than 29,000 “preserved,” which means giving their owners tax breaks, loans, and various other incentives to keep rents affordable for the next 15 to 30 years.

HPD says that in 2015, New York City saw the “most new affordable housing ever built in one year” since the agency was established in 1978.

That was only 60 more units than the number for people who make more than $93,000, which included the 4,500 apartments kept rent-stabilized for 20 years by a deal with Stuyvesant Town’s new owners.

It’s hard to tell how many of the lower-income units the administration cites are new construction, because the only income-level figures HPD provided us don’t distinguish between new and preserved units. The Housing First program’s 2014 plan promised to build 16,000 apartments for people at this income level.

“The question is not ‘are they meeting their numbers?’ but ‘are they the right numbers to meet?’” says Benjamin Dulchin, head of the Association for Neighborhood and Housing Development, a coalition of neighborhood housing and community-development organizations. 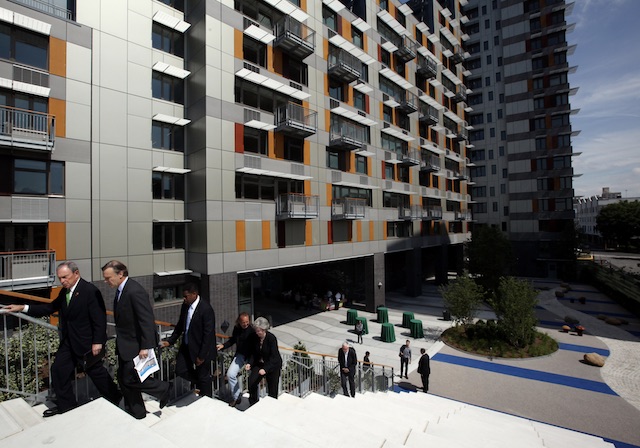 Mayor Bloomberg at the ribbon cutting to mark the official opening of the Via Verde affordable housing development located at 700 Brook Avenue and East 156th Street in the South Bronx, 2012 (Edward Reed / Mayoral Photography Office)

Dulchin praises the de Blasio administration for “building like gangbusters” and making more of a commitment to low-income housing than previous administrations, but says it’s “a little light on the low-income.”

For people making around the city median, the de Blasio administration did significantly better in its first two years than Michael Bloomberg’s did in his last five, averaging almost 4,000 more units created or preserved, according to HPD.

De Blasio did slightly worse for “very low income” people, averaging about 300 a year less, and created or preserved more than twice as many “extremely low income” units than Bloomberg, who averaged under 400 a year.

“What [Mayor de Blasio] did for the first year and a half was not that different from Bloomberg, which is not surprising, because they were using the same tools,” says Tom Waters, housing policy analyst at the Community Service Society.

Without the ability to build housing directly or to preserve it by strengthening rent-control laws—the most effective way of preserving it—the de Blasio program relies on leveraging the market, which makes it difficult to create lower-income housing.

It leverages the market through a complex system of tax credits, subsidies, and “mandatory inclusionary housing,” in which the city will rezone neighborhoods to let developers construct taller buildings in exchange for making 25% to 30% of the apartments in them “affordable.”
That system relies on market rents and government aid subsidizing the lower rents enough to make the building profitable.

In practice, says Dulchin, the federal low-income housing tax credit produces housing for people at 60% of the metropolitan “area median income,” or about $47,000 a year for a family of three, while “preserved” apartments can go to those at 40% of AMI, about $31,000.
Extremely low-income housing “is particularly hard and particularly expensive to do,” he says, noting that these programs generally need direct and ongoing federal subsidies, as the city doesn’t have money for rental subsidies.

“It takes more subsidy to hit these lower levels, but that doesn’t mean we’re not doing it,” an HPD spokesperson says.

The de Blasio administration’s main vehicle for creating lower-income housing has been HPD’s Extremely Low & Low-Income Affordability (ELLA) program, which gives direct construction subsidies of up to $75,000 per unit for apartments affordable to people making less than 60% of AMI, with 10% for people making less than 30%. Initial rents range from about $350 for a studio to $1,200 for a three-bedroom apartment.

The problem, says Waters, is that only a small number of these apartments can be built, and while the subsidies mean rents don’t have to be set high enough to recoup the cost of construction, the city doesn’t subsidize operating costs.

“To really change the game, you need an operating subsidy,” Waters explains. The most recent Rent Guidelines Board’s Income and Expense study released last month estimated the average cost of operating a rent-stabilized apartment outside “core Manhattan” at $794 a month including taxes.

To put that in perspective: Even if the minimum wage were raised to $15 an hour, workers getting that subsidy would be “rent burdened,” spending more than 30% of their income, if they paid more than $750/month. A New Yorker living on $1,150 a month in Social Security would need to pay less than $350. 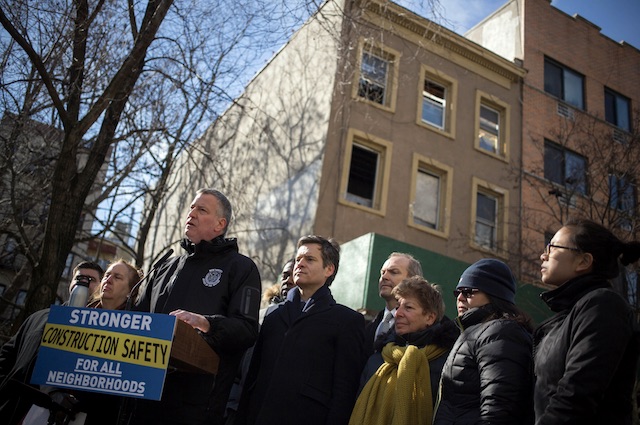 One group that is definitely not happy with de Blasio’s affordable housing program is the city’s construction unions. The plan does not require affordable-housing developers to pay union-scale wages.

“The people who build these houses won’t be able to afford to live in them,” says John Skinner, president of Metallic Lathers and Reinforcing Ironworkers Local 46.

Affordable-housing construction is almost completely nonunion. Union officials and organizers say some contractors are among the most abusive in the industry, regularly cheating their workers out of pay. Wages are typically $10 to $20 an hour, says Skinner, and some contractors don’t train their workers well and “don’t care about safety.”

Of the 17 construction workers killed in workplace accidents last year, 16 were on nonunion sites. “Why is there not massive outrage?” Skinner asks.

“Building and preserving more affordable housing is critical to reducing income inequality, as well as making sure that these New Yorkers are paid a fair wage,” Gary LaBarbera, president of the Building and Construction Trades Council of Greater New York, said in an email. The unions “remain steadfast in our belief that all workers building affordable housing deserve good wages with benefits.”

The de Blasio administration originally argued that paying union-scale wages would reduce the amount of affordable units it could build. Now it says that it can’t use zoning regulations “to address labor rules.”

Skinner disagrees. The housing built is receiving public subsidies, so “they can require prevailing wage,” he said.

HPD says the law is the law, and zoning can be used only to regulate things like height, bulk, and land use. 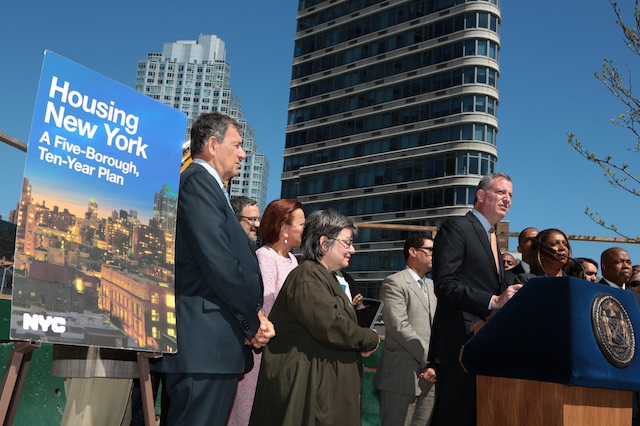 In East New York, the first neighborhood rezoned for mandatory inclusionary housing, many residents are wary.

“What happens if you make less than $32,000?” Lorna Blake, a Trinidadian immigrant who works as a therapist for the developmentally disabled, asked at a May 7 rally on Fulton Street. The mayor promised affordable housing, she said, but “after all the town-hall meetings, we realized it was all a big lie.”

The neighborhood’s median income is $35,000, and one-third of households make less than $23,000. “The affordability levels are so out of reach for local residents that it’s meaningless,” says Pete Nagy of New York Communities for Change.

To increase the proportion of below-market apartments above the 25% required by inclusionary zoning, HPD will subsidize the construction of buildings that are “100% affordable, and at levels that target low and extremely low income.” Between 40% and 50% of those apartments will be slated for people who make less than $41,000.

But a New York Communities for Change analysis released in March projected that even including the ELLA program subsidies, only about 20% of the total new apartments built would be affordable for people making less than the neighborhood median, and only 4% for the poorest third.

Half—about 3,500—would be market-rate, in a neighborhood directly in the path of gentrification coming east from Bushwick and Bedford-Stuyvesant.

More than one-third of the households in the rezoned area are already spending more than half their income on rent, says a report issued earlier this year by the Coalition for Community Advancement, an alliance of neighborhood groups.

In a key indicator of gentrification pressures, home-sale prices more than doubled between November 2012 and March 2015.

Most of the 15 neighborhoods being considered for rezoning are “clamoring” for a higher percentage of truly affordable low-income housing, says Dulchin. The program, he adds, “should not be judged by the 200,000 goal, but by how it works for the neighborhoods”—whether it strengthens them or uses market forces that will destabilize them.

In places like East New York, says Waters, the administration is arguing that you can only get a certain amount of affordable housing. But it’s missing the point, he says, “to argue that since the city can only afford to help people who make $60,000 a year, people who make $30,000 should be happy with the results.”