Is De Blasio Hiding Something?

Earlier today a lawyer for Bishop Orlando Findlayer argued in court that the February arrest of his client that triggered his release after midnight mayoral phone calls was a big misunderstanding, and he rejected an offer to pay a $75 fine to resolve the case. The Office of the Mayor also denied our request for any records pertaining to communication between Mayor de Blasio and Bishop Findlayter on the night of the arrest and in the following days. Their claim: none of the records exist, except that they do, but we can't have them.

Confused? So are we. Here is what Henry Berger, the Records Appeals Officer for Mayor de Blasio, told us:

The only records found by the Office of the Mayor pursuant to your request are exempt from disclosure under Public Officers Law §87(2)(g) as “inter-agency or intra-agency materials” which are not statistical or factual tabulations or data; instructions to staff that affect the public; final agency policy or determinations; or external audits, including but not limited to, audits performed by the comptroller and the federal government. As a result, the Office of the Mayor does not possess any records that are responsive to your request that are not exempt from disclosure.

"There's an inconsistency in this response," says Robert Freeman, the executive director of the Committee On Open Government. By law, Freeman is required to be cc'd on all of these FOIL appeal rejections. "They say there's no records, now they're saying yes there are records but we're withholding them. Well, that's different from saying there are no records at all."

Indeed, last month we were told that no records existed, which seemed fishy considering that the Mayor's Office told the New York Times that they did.

Berger is saying that these records do exist, but they are exempt, because they do not contain "statistical or factual tabulations or data."

There are several possibilities here:

1) The Office of the Mayor is unaware that text messages, telephone calls, emails, and other documents contain time stamps and other pieces of data that create a narrative of factual information.

2) The Office of the Mayor is unaware that they may redact information they say they don't have to turn over (though we can't see how communications between the mayor and third parties are exempt under FOIL—remember Cathie Black?) and leave the factual information for us.

3) Mayor de Blasio doesn't want you to know anything about these communications.

4) None of the text messages, phone calls, and emails between Bishop Findlayter and the Office of the Mayor in the days following the arrest contain ANY factual information, and all the other information is privileged by law.

If it's #4, we've asked the Office of the Mayor to certify that in writing, under a provision in the FOIL law that allows us to do so, and we'll let you know if they respond.

We've asked Mr. Freeman if the Mayor's Office is obligated to respond to our request to certify their findings in writing. "Are they obligated? No. Would they be wise to ignore you? That's a separate question." 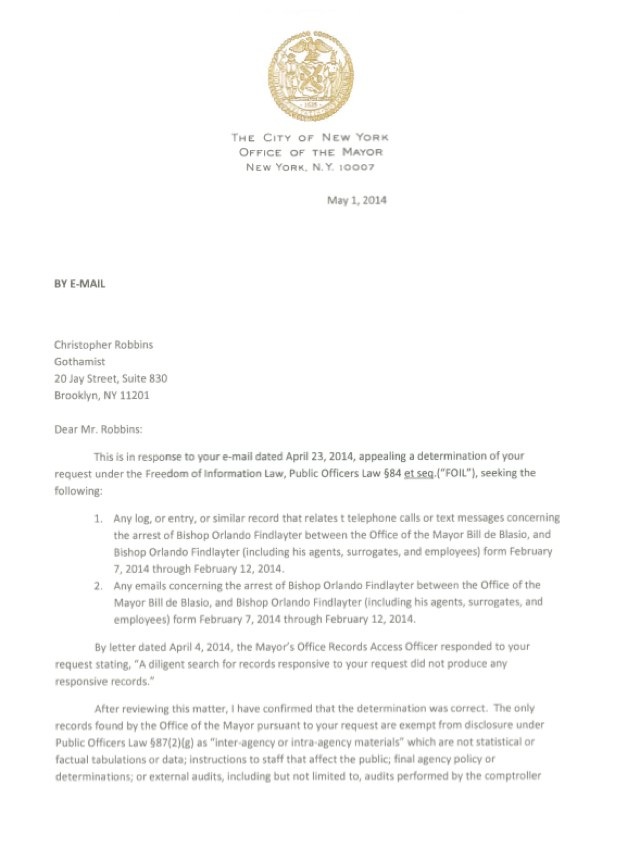 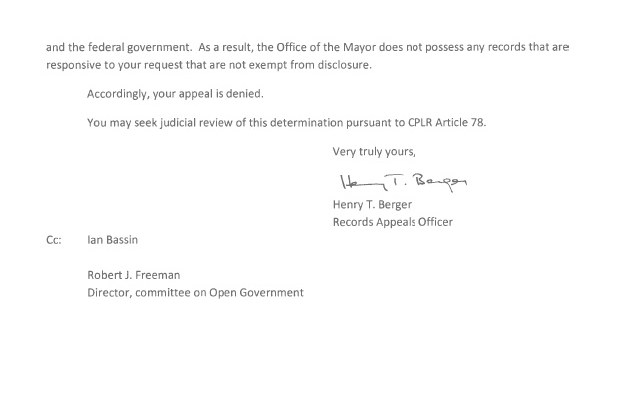 #bill de blasio
#Bishop Orlando Findlayter
#Committee On Open Government
#FOIL
#transparency
#original
Do you know the scoop? Comment below or Send us a Tip