At the 100 Resilient Cities' Urban Resilience Summit in Manhattan Monday morning, Mayor Bill de Blasio urged his fellow mayors to "push a little harder" on climate change. "Climate change could come home and affect you and your family at any given moment, and therefore real change has to happen," he told the collection of about 500 urban leaders, all of whom have committed to helping their cities weather various economic, social and environmental challenges. "I want to urge you to be bold in setting numerical goals and making that a way to rally everyone to the cause."

De Blasio touted some of the city's more recent efforts to combat the deleterious effects of climate change while simultaneously fighting economic inequality. These include the OneNYC plan, which built upon predecessor Mayor Bloomberg's PlaNYC by calling for, among other things, an 80 percent reduction in carbon emissions by 2050 and more sustainable waste-management practices; along with plans to retrofit city-owned and privately-owned buildings to make them more energy-efficient; and other green infrastructure projects focusing on economic and environmental sustainability.

And he focused on one of the city's biggest contributions to climate sustainability—mass transit. The mayor mentioned some of his signature transportation projects, like his proposed Brooklyn-Queens Connector street car system and the new citywide ferry service. "We just need more and more good, sustainable transportation options, and more and more reasons for people to get out of their cars," the mayor said. "Remember my friends, we all are bedeviled by the challenge of the automobile."

After President Trump announced he would pull the United States out of the Paris Accord in June, de Blasio joined other leaders around the nation in vowing to adhere to the Accord's stipulations with or without the federal government, stressing the importance of "fighting for our Mother Earth" at a rally during the G20 Summit in Hamburg, Germany earlier this month. But critics have side-eyed some of de Blasio's more recent climate change-combating rhetoric, calling the mayor hypocritical for asking New Yorkers to make environmentally-friendly lifestyle changes while his entourage drives two SUVs from Gracie Mansion to his gym in Park Slope on a regular basis. 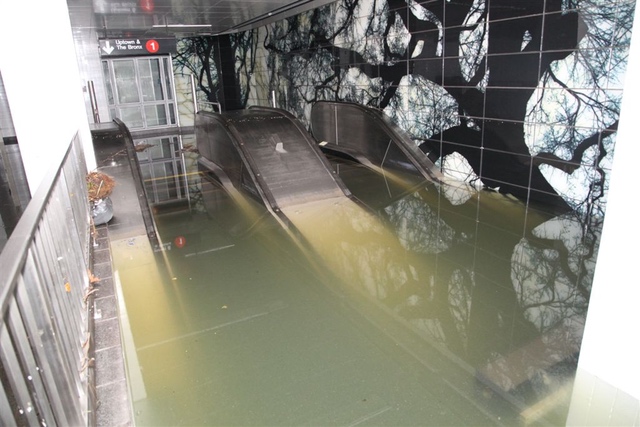 And long before Trump, some environmental advocates claimed de Blasio wasn't making climate policy as big a priority as Bloomberg, who made combating global warming a signature issue during his time in office and pushed initiatives like bike lane expansion, congestion pricing, and a five-cent plastic bag tax.

"He certainly hasn't been a pathway mayor like Bloomberg was on the issue," Steve Cohen, Executive Director of Columbia University’s Earth Institute, told Gothamist. "What you don't see that you saw before was the kind of performance-based management, the specific set of objectives and sense of urgency you sensed with his predecessor." He noted that while de Blasio is still trying to push a pro-environment agenda, it's not clear if his administration's moves match the speeches.

"I think the problem is that he's announcing a lot of things they're doing, but you don't see a management followup," he said. "Converting the city's fleet to hybrid and electric vehicles, and doing the energy audits, those kinds of things, they're on the books. The question is whether you can see them. The work that's being done, Sandy work to shore up the infrastructure of city to make sure we're not as vulnerable, that started before he got there and it's basically being funded by federal money.

"He should be given credit for continuing to push that very critical resiliency," Cohen said. "The rhetoric is there, the policy is there, the question is if the management followup is there and the jury is still out."

Ben Orlove, a senior research scientist at the International Research Institute for Climate and Society and a professor at the Columbia School of International Public Affairs, told Gothamist that while he's happy de Blasio is touting policies that aim to both mitigate climate change and help the city adapt to its effects, there is much more that could be done. "Does he get an A- or B+ where Bloomberg got an A? He could push it harder, he is pushing it some," Orlove said. "A general issue of de Blasio's complex message is that he's caught up in a number of short-term issues, so it's hard for him to have the larger focus and the longer term view that's important for addressing climate change."

Orlove praised the mayor's plan to reduce emissions 80 percent by 2050 and his focus on affordable housing and equity, but said he hoped the mayor would consider supporting buyouts for people living in certain coastal areas of the city, which has been a contentious issue in the wake of Superstorm Sandy. He also suggested the mayor push more for green infrastructure in addressing urban heat island effect, which occurs when an urban area is significantly warmer than the rural area around it due to human activities.

"I would hope that he would include green infrastructure in his efforts to address the urban heat island effect, particularly in dispersed units like community gardens, which are currently under severe threat from development," Orlove said. He noted that green infrastructure and vegetation like trees and community gardens could cool down lower income neighborhoods, limit the effects of heavy rainfall, and relieve some sewage runoff in our rivers, potentially even making them clean enough for New Yorkers to swim. "Open swimming would help immensely with cooling," Orlove said. "It seems utopian, but we never thought we'd get rid of the dog poop or smoking in restaurants."

Orlove also noted that though de Blasio has taken particular care to plug the ferry system as a green initiative, it's really a drop in the bucket when it comes to combating climate change with public transportation. "The ferries help reduce emissions indirectly by reducing congestion on roads, which people turn to with an ineffective and overloaded subway system," Orlove said. But he pointed out that other initiatives, like improving the subway system, expanding the Citi Bike program, putting tolls on the East River bridges and introducing peak congestion pricing, would have a more direct effect on cutting carbon emissions. The mayor said last month that he would not support congestion pricing.

As Cohen said, "You have to get some people off roads. Water-based transport is a good if very partial answer to some of those issues. Focusing on bicycles and walking and subways and buses is better idea."

Meanwhile, the Sierra Club told Gothamist that the city would benefit from having some kind of concrete goal for renewable energy. "The Sierra Club supports green initiatives for new buildings and retrofits, and renewable energy to replace all fossil fuels, including new fossil fuel infrastructure, such as natural gas pipelines and gas-fired power stations," Lisa DiCaprio, Conservation Chair of the Sierra Club's NYC Group, told Gothamist in a statement. "We also support expanding the number of municipal electric vehicles and charging stations."

Nevertheless, Cohen concedes that de Blasio is "doing what he should be doing. He could be doing a little bit more. A lot of what we're seeing is very positive."

#climate change
#global warming
#mayor de blasio
#original
Do you know the scoop? Comment below or Send us a Tip