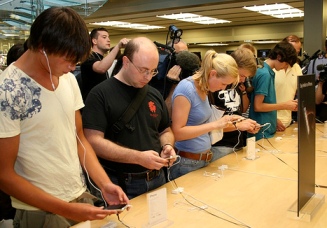 Showing that there are no bounds to lawsuit insanity, a Queens resident is suing Apple for marking down the price of the iPhone - and she wants $1 million. Why? Because now she can't sell them for a profit on eBay! Damn you, Steve Jobs, and your possibly faltering precious product!

Dongmei Li claims that Apple "violated price discrimination laws" when the prices of the 8GB iPhone were slashed from $599 to $399 and the sale of the $499 4GB was stopped. The "less favorable" terms of a 4GB purchase, rather than an 8GB purchase, are mentioned in the suit - Li had purchased two 4GB models with the intention of selling them on eBay. Ouch, but technology will bite you in the butt every time.

Li's lawyer Jean Wang explained, "Since they're selling the 8-gigabite phone for $399, there's really no market for her." So, wait, is she in the cult or not? AT&T is also named in the lawsuit.