Iranian President Ahmadinejad Can't Go to Ground Zero, But He Will Go to Columbia 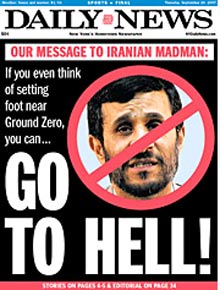 Iranian President Mahmoud Ahmadinejad is getting a lot of ink in our newspapers today after it was revealed that (A) he had requested a visit to Ground Zero - to lay a wreath, no less - and then shortly later that (B) the city had denied the request. Way to work fast, city agencies!

Iranian mission to the United Nations says that Ahmadinejad still wants to go to Ground Zero, but the Daily News sends him a message on today's cover and with an editorial that starts off, "No. No. No. Iranian President Mahmoud Ahmadinejad can not be allowed to defile Ground Zero, must be stopped from exploiting this hallowed landmark, this tragic product of a fanaticism cousin to the demons in Ahmadinejad's soul."

The NYPD explains that Ahmadinejad's request to visit Ground Zero and descend into the Pit came a month ago and that it was denied on grounds of security. The NYPD further stated that any visit to Ground Zero would be denied. In fact, the Iranian Mission met with the NYPD, Secret Service and Port Authority, which all explained that the site is a live construction zone weeks ago. But the news cycle was confused, because earlier yesterday, Police Commissioner Kelly seemed to imply that the discussions were still ongoing, only for the NYPD spokesperson to clear things up and shut down any speculation. The NY Times reminds us that though family members were eventually allowed to visit the Pit during the sixth anniversary events on September 11, no members of the public were allowed.

Politicians from both parties agreed that the Iranian leader should not be allowed to visit Ground Zero. The Sun tallied up the comments: Senator Hillary Clinton called it "unacceptable for Iranian President Ahmadinejad, who refuses to renounce and end his own country's support of terrorism, to visit the site of the deadliest terrorist attack on American soil in our nation's history," while Senator Barack Obama said Ahmadinejad not should be allowed to "posture" against the "backdrop" of Ground Zero. Fred Thompson's spokesperson said it was an "insult to the memory of those who died on 9/11 at the hands of terrorists" while Mitt Romney called the request "shockingly audacious," and Giuliani felt it was "outrageous."

One New York location Ahmadinejad is being welcomed at (other than the U.N. General Assembly) is Columbia University. He will be speaking at the World Leaders Forum. Last year, Columbia's School of International and Public Affairs had to uninvite Ahmadinejad, supposedly due to security, but some suspected it was because the school has been embroiled in some Middle East controversies. Anyway, Columbis President Lee Bollinger issued this statement about this year's invitation; here's an excerpt:

In order to have such a University-wide forum, we have insisted that a number of conditions be met, first and foremost that President Ahmadinejad agree to divide his time evenly between delivering remarks and responding to audience questions. I also wanted to be sure the Iranians understood that I would myself introduce the event with a series of sharp challenges to the president on issues including:

* the Iranian president’s denial of the Holocaust;
* his public call for the destruction of the State of Israel;
* his reported support for international terrorism that targets innocent civilians and American troops;
* Iran's pursuit of nuclear ambitions in opposition to international sanction;
* his government's widely documented suppression of civil society and particularly of women's rights; and
* his government's imprisoning of journalists and scholars, including one of Columbia’s own alumni, Dr. Kian Tajbakhsh.

I would like to add a few comments on the principles that underlie this event. Columbia, as a community dedicated to learning and scholarship, is committed to confronting ideas—to understand the world as it is and as it might be. To fulfill this mission we must respect and defend the rights of our schools, our deans and our faculty to create programming for academic purposes. Necessarily, on occasion this will bring us into contact with beliefs many, most or even all of us will find offensive and even odious. We trust our community, including our students, to be fully capable of dealing with these occasions, through the powers of dialogue and reason.

Bollinger, a First Amendment scholar, also added, "I would also like to invoke a major theme in the development of freedom of speech as a central value in our society. It should never be thought that merely to listen to ideas we deplore in any way implies our endorsement of those ideas, or the weakness of our resolve to resist those ideas or our naiveté about the very real dangers inherent in such ideas."

Bollinger is meeting with Columbia students today to discuss the student questions that will be asked. No word on whether security guards with Tasers will be present.

Ahmadinejad has also openly asked President Bush about the U.S. government's involvement in the September 11 attacks.