iPods Linked to Rise in Crime 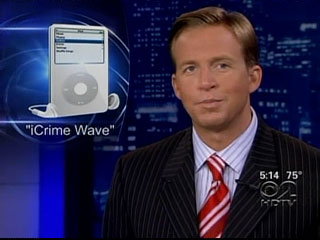 Earlier this week, a Staten Island woman was arrested after she stabbed a 19-year-old suspected of stealing her son's iPod. A study released by the Urban Institute links a rise in violent crime between 2005 and 2006 to the proliferation of iPods. Though violent crime had been dropping up until 2004, iPod-envy started to spread.

In New York, gadget-related crimes were a big news story in 2005: Though subway crime was dropping, iPod and cellphone thefts were up, with robbers targeting people with white iPod headphones. Teens all over the city were stealing iPods, and most tragically, 15-year-old Christopher Rose was killed in Brooklyn for his iPod in July of 2005. His father, Errol Rose, continues to mourn his son's death and told WCBS 2 that parents need to be aware of what their kids bring into the home. "Sometimes they do walk into the house with gadgets that are not theirs and if you don't quiz them or ask them where did they get it from you will never know that they stole it from somebody else."

The Urban Institute's John Roman explained how the iPod has become the unwitting bull's eye for criminals. "It's almost the equivalent of walking around with a $100 bill taped to your back or something, so you' ve got this very expensive little piece of machinery that's very visible to other people. And you're sort of tuned out, while you walk around with it, so it really is an invitation to a would-be robber." The UI study noted:

Past crime waves are thought to have occurred in a similar way—triggered by the introduction of a new high-status and expensive product. For instance, in the 1980s and 1990s, the proliferation of such valuable products as expensive basketball shoes or North Face jackets may have led to new crimes. However, in past instances where the supply of crime creating products increased, the consumer population purchasing these goods—and the would-be offenders coveting those products—made up a relatively small part of the U.S. population. By contrast, iPods are everywhere, and, unlike a jacket or a sneaker, one size fits all.

And back in 2005, we were moved by another thing Errol Rose said, "We live in a world which is changing rapidly. We have the technology that can give us the iPod and everything else, but it's not all these things. We have to work on the minds and the hearts. We're failing these kids. We're not loving them like we're supposed to."

The NYPD has previously made suggestions about keeping you and your iPod safe. In fact, here's an NYPD podcast about preventing iPod theft (the part about etching iPod and other electronic devices is at about 3 minutes).