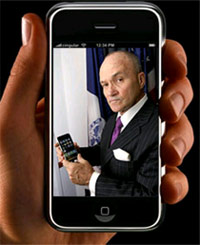 Police Commissioner Ray Kelly explained why there are more younger muggers these days: It's the iPhone!

The News reports, "Juveniles [ages 11-19] accounted for 29% of the 7,340 robbery arrests and 27% of the 4,566 grand larceny busts this year, an 8% jump in each category compared to this time last year." Kelly said, "The explosive popularity of these devices has also made them inviting targets for thefts. Teens are commonly the culprits as well as the victims." A police source put it more bluntly, "A kid taking out an iPhone and using it is like waving around $300."

When iPods were first introduced, there was a huge spike in iPod-related crime (even private school kids were stealing them), even a mugging that turned into murder. One social scientist likened iPods to "walking around with a $100 bill taped to your back or something." More recently, a sommelier was mugged at BB point, with his assailants taking his money and iPhone, and some youths were arrested for trying to offer cheap iPhones to gullible Craigslisters.

#crime
#iphone
#ipod
#juveniles
#mugger
#nypd
#police commissioner ray kelly
Do you know the scoop? Comment below or Send us a Tip