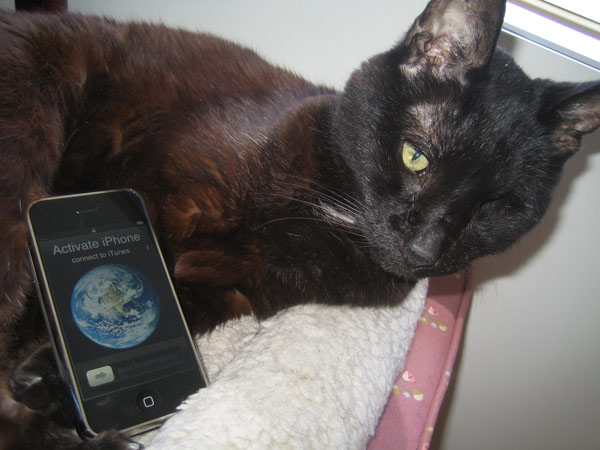 We'd give you a review of the iPhone's capabilities - if we could get the damn thing activated. Yes, the ultimate irony: Activating the phone take much longer than waiting on line for one! Apparently AT&T underestimated the number of phones that would be bought - and the number of people who'd try to activate them - and various systems weren't able to handle activation requests. No, it's not the end of the world that it's not working yet. And yes, many people have working iPhones, so something must be working out there. But since some people might have similar, frustrating experiences, we decided to share.

Background: In order to use any of the touted iPhone functionalities, you need to activate the phone via iTunes. Meaning that when you take the iPhone out of the box, you get an screen with a globe that says "Activate iPhone." You can dial out for 911, but that's it. You can't use the iPod function (though you can port songs over and use it as a very glorified iPod Shuffle), you can't sync Contacts, you can't do much of anything.

We started the activation dance around 8PM, but would get an error from iTunes saying that our iPhone could not be activated with our existing AT&T account. We spoke to four different customer service reps over the night, after waiting on hold for about two hours total.

All the reps gave us different answers (special kudos to the lady who told us to call a number that turned out to be a non-working Bell Canada toll-free line), showing how ill-prepared AT&T and Apple (you have to blame both parties here) were for the demand. And this was not an isolated problem, as many forums, such as this one on MacRumors, have noted similar problems.

Around midnight, we were able to get the activation on iTunes working but then the final screen said that our request would take further processing and then we would get a confirmation via email. So we called it a day and decided to sleep on it. But there was no email at 8AM. And as it happened, our old cellphone's SIM card was disconnected, so we have no cell service at all. We called customer service again, waited on hold for an hour, and asked what the heck was going on. The explanation: There is a huge backlog of activations that AT&T is trying to process; an "unprecedented" number of iPhones were sold and no one realized that everyone would try to activate them after buying them.

Oh, please! Besides finding out that there were some other issues with our plan that might have prevented activation (plus attempting to power on-and-off the phone a few times, which apparently helped some people out there), our phone was still not activated and we were told we had to wait for the confirmation email. We spoke to a customer service manager and suggested that AT&T would do something meaningful to make it up to customers, to leave them in this limbo.

That said, most of the AT&T customer service reps as helpful as they could be, given the circumstances. It's not like they are in charge of how many activation ports are available. We believe the blame lays further up the ladder, on the shoulders of the chuckle-headed executives who didn't realize that the buzz and hype might actually sell a lot of phones - and that customers would actually want to, um, use the phones. And while people have been faulting AT&T with this issue, you need to blame Apple to some degree. Sure, Apple held up its end of the bargain by having a smooth retail experience, but by choosing AT&T as a partner, we would imagine they were part of the process that outlined an activation strategy.