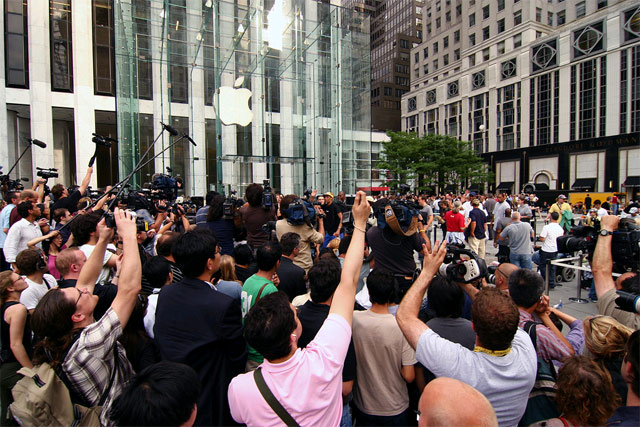 With lines of potential customers snaking around the block, New York's Apple Stores on Fifth Avenue and in SoHo opened their doors at 6PM for the launch of the iPhone, the unbelievably hyped multi-functioning personal accessory.

Overall, the lines moved pretty quickly, as Apple employees just focused their efforts on letting customers buy iPhones and move out. The early customers couldn't use the iPhone demos, though later customers were able to try them out and check the functions. The SoHo store's line reached around the corner of Prince and Greene up to Houston and around the Mercer. Spike Lee arrived to buy an iPhone, as the first people on line at the Soho store were doing it for Keep A Child Alive. 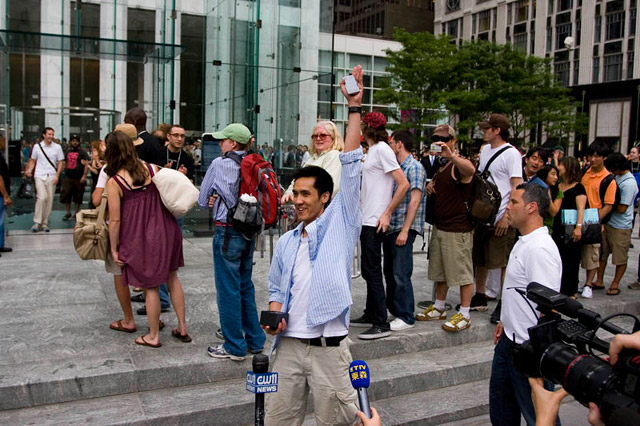 The crowd at the Fifth Avenue store was large, but we think the crowd of media and spectators was bigger. Starbucks was handing out coffee to everyone, as other marketers got into the action (Virgin Atlantic gave away socks, SmartWater gave water). And, as with any line of people waiting for many hours, they made sure no line-cutters got through; only, they were backed up by the added security, some of whom we suspect were off-duty police officers.

With helicopters circling overhead and the NYPD stationed on Fifth Avenue, the excitement reached a fever pitch when Apple employees started getting the line ready. Then cheering began when the doors opened. And when customers left with an iPhone in hand, a receiving line of Apple employees cheered and congratulated them when they left.

While a CBS story is headlined, AT&T Stores Brace For Violent iPhone Shoppers, we have to say, the media was way more violent that the shoppers. In fact, when the first iPhone purchasers emerged from the store, reporters started to grab at them. 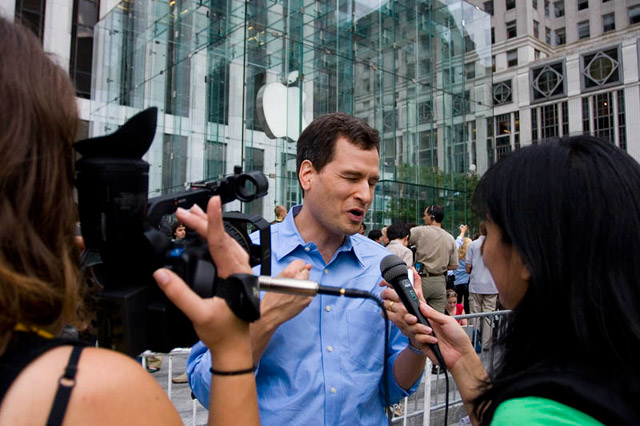 Were you able to get it activated? We saw the NY Times' David Pogue outside the store; he wasn't waiting for one, as he's had his for two weeks. He was just as enthusiastic about the iPhone's merits (and just as frustrated with AT&T's network) as he is in his hilarious video about the iPhone. 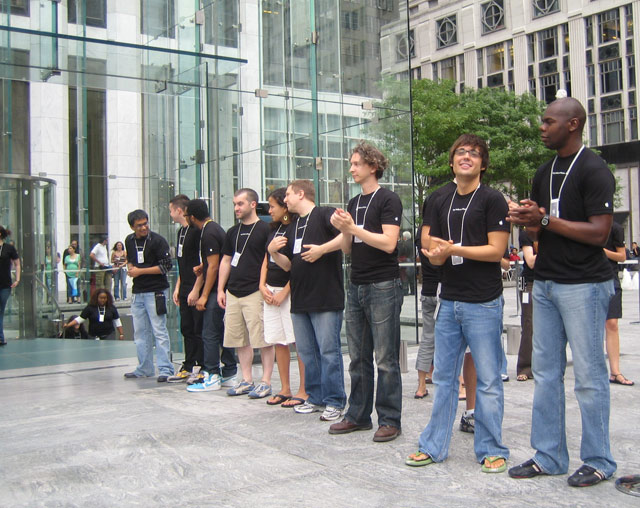 Did you buy an iPhone? How long did you wait? On tech sites, people are taking apart the iPhone, looking at how to add sim cards, interview Apple co-founder Steve Wozniak (on line in San Francisco) and much more (check out , Engadget, Gizmodo, and Macrumors). We bought an iPhone, but have been trapped in AT&T activation hell (it's been a few hours, we've cycled through 4 different customer service reps, and have waited on hold longer than we were on line). It's very pretty, though.