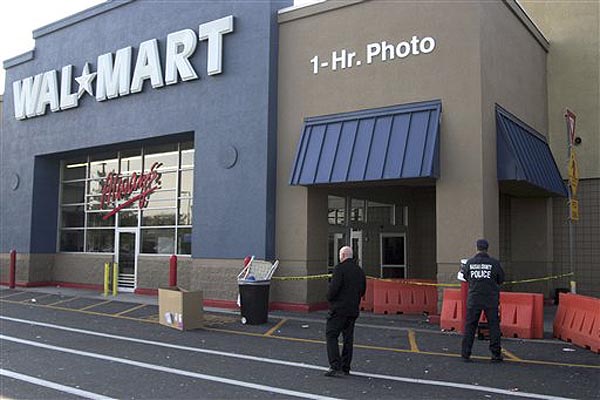 Yesterday, the Wal-Mart in Valley Stream was open for business, a day after a worker was trampled to death by shoppers eagerly waiting for the big Black Friday sale. Newsday reports, "But for the spiderweb crack on the glass front door and the car tires rolling over fallen police crime scene tape as drivers searched for parking spots, there was little outward sign of the early-morning chaos" seen on Friday. 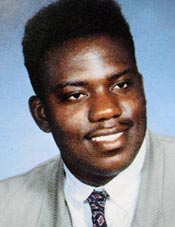 The family of 34-year-old Jdimytai Damour, who was a temporary hire for the holiday season (pictured, at left, in a 1993 high school photo), is awaiting the autopsy results. His sister Danielle told the Daily News, "We've got a lawyer already. They haven't released the body because they want to do the autopsy." The Nassau County Police are reviewing surveillance tapes, but admitted it might be hard to press criminal charges.

Yesterday morning, there were over 100 people waiting outside for Wal-Mart to open its door at 7 a.m. Still, shoppers were critical. One said, "You hear about it on the news every Black Friday. You hear about the chaos that takes place. They should have been prepared for this."

The NY Post reports one witness as saying the police left the Wal-Mart right before the chaos: "Once they left, it started getting rowdy. The crowd got restless." The Nassau County police say that while cruisers did patrol the mall, shopping lines are "not something we could normally police," pointing out, "You have to remember that this is private property. The onus is on the store to provide security."

Wal-Mart says that they did have additional security and barricades set up, but added that security is decided on a store-by-store basis. And the repairmen fixing the store's doors, which were damaged in the melee, told Newsday "it would have taken more than 500 pounds of pressure and a jolt to cause the damage."