A new building is going up near a long-empty land parcel near the East River in Midtown, and it looks a little...sideways.

Shall we zoom in?

Lest you think this sloped structure is the product of some Jägerbombed architect, it turns out the building is supposed to look like it's trying to nap on its neighbor's shoulder. The development, located at 626 First Avenue and designed by SHoP Architects, will be comprised of two copper-covered high-rise towers connected by a bridge. One such tower will lean ever so gently into the other, like so: 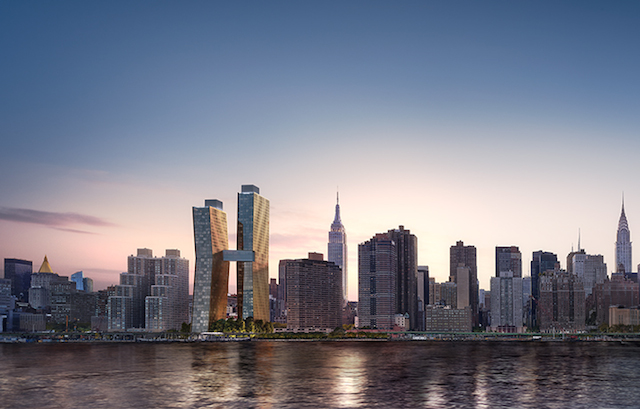 It's certainly unique, and it'll be interesting to see what shape some of the development's 800 new rental units will take when complete—I once stayed in a pyramid-shaped hotel in Vegas, and it was pretty weird to ride sideways in an elevator, particularly when under the influence of, well, Vegas. But at least this Leaning Tower of Tax Havens is more fun to look at than, say, a giant needle, so points for the SHoP crew.

The development is being constructed a few blocks from a 6.4-acre property located between 38th and 41st Streets. That site, owned by 626's former management, has been empty since 2007 thanks to some screwy real estate business, and the Times called the whole area an "eyesore" back in 2013, so this is some small improvement. Plus, the rich folk who get to live here will be treated to an infinity-edge pool, a fitness center and a squash court, so you won't have to fight them for an elliptical at your local gym. 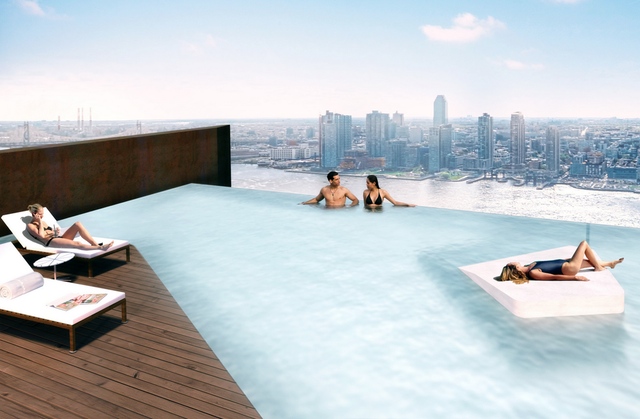 "Honey, do you ever worry that the wall on our infinity pool will crack as we lean against it, sending us plummeting to our deaths?" "No, don't be silly, I worry more that the pool will be struck by a thunderbolt dispatched by a vengeful god to electrocute us all for being so insufferably smug, but that's probably unlikely, too. I'm going to swim over there and pee while looking down at the poors."

#626 1st avenue
#building
#development
#luxury
#midtown
#reddit
#sideways
Do you know the scoop? Comment below or Send us a Tip
A new Gothamist is coming! We’ve moved comments over to our beta site. Click here to join the conversation and get a preview of our new website.