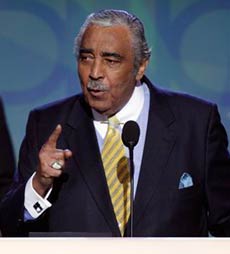 Representative Charles Rangel's Dominican Republic villa continues to be scrutinized as it's now reported the interest on his mortgage was waived. This comes a day after his lawyer also revealed the powerful Chairman of the House's Ways and Means Committee did not report $75,000 in rental income (over the past 20 years) from the villa.

Last Sunday, the NY Post raised questions about income from the villa, which Rangel allegedly doesn't consider a second home but an investment, being missing from his 2006 and 2007 returns. Lawyer Lanny Davis said Rangel would file amendments to his returns and that he did not believe Rangel would need to pay federal taxes. And apparently Rangel had no idea about all of this until the Post's story!

According to Post, Davis says income from the villa (which can be rented for up to $1,100/night) "is pooled, with 47 percent of it divided among the owners. Cash from individual villas doesn't flow directly to their owners." Davis referred to the Post cover, with an unflattering photograph of Rangel sunning and the headline "CASH COW," "It's not a cash cow, by any stretch of the imagination. It walks, talks and feels like a time share... It's certainly not generating any cash." 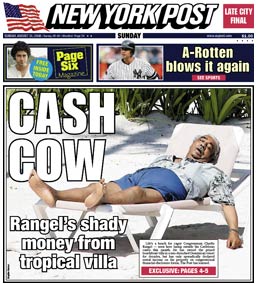 As for the no-interest loan, the hotel says that since rental income was below projections, it stopped charging investors interest on their loans. Labor lawyer and Rangel friend Theodore Kheel, who built the resort and encouraged Rangel to invest, said, "I know Charlie Rangel as a man of integrity. He would never do anything wrong deliberately." Davis also said, "The Rangels simply made an error in interpreting what was happening."

However, a number of ethics questions are being raised. The Citizens for Responsible Ethics calls this Rangel's "third strike," including his rent-stabilized apartment bonanza. The National Republican Congressional Committee said, "Charlie Rangel is the designated leader on tax policy in the Democrat-led Congress, but while he is authoring massive tax hikes to exact on middle-class Americans, he is apparently dodging the IRS at all costs." And Speaker of the House, Representative Nancy Pelosi, supports an investigation. Her spokesman said, “Instead of making this political, what we should do is have the ethics committee investigate. We want to look into this.”

The NY Times adds that there are a number of "inconsistencies" with Rangel's returns. For instance, the Congressman owns a 6-unit building on West 132nd Street and hasn't reported any income from it "between 1978 and 1987, and between 1993 and 2000." "Mr. Davis said that the congressman had reported the rental activity on his tax returns every year and paid all required taxes, but that he had not listed it on his financial disclosure forms in the years when the couple posted a loss."