Tens of thousands of low-income elementary school students in New York City attend public schools that exist as socioeconomic and racial islands within diverse neighborhoods, according to a new study conducted by the Center for New York City Affairs at the New School.

"Segregation is not always the result of housing patterns," write the study's authors. "The city's schools are even more economically and racially segregated than the neighborhoods, and for economically disadvantaged students, that usually translates to inferior education."

There are 734 neighborhood elementary schools in New York City, and at roughly 17% of them the median enrolled family earns 20% less than the median income in the surrounding neighborhood.

This discrepancy is stark on the study's income map—light green dots representing schools where the median family income hovers between $30,000 and $41,000 are set off by dark green neighborhoods like DUMBO, Downtown Brooklyn, Red Hook and the Upper East Side, where the median income rangers from $60-95,000. At PS 125 in Harlem, the average family makes less than half of the zone's median income. 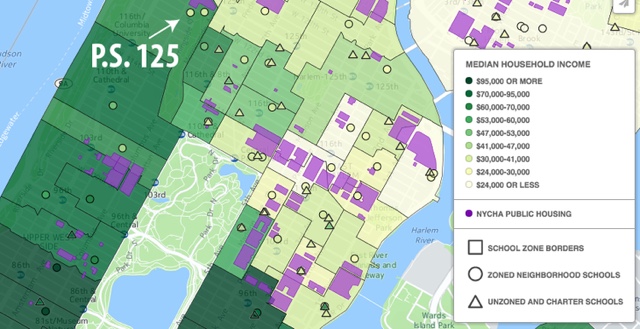 More than half of the public schools in the city, 332 of them, are more than 90% black and Latino, according to the study's findings. While the vast majority of these schools are in majority-black and Latino neighborhoods—Hunts Point, Harlem, East New York—59 of them are in neighborhoods that have larger white populations, like Sunnyside, Williamsburg, and Boerum Hill.

At PS 287 in Downtown Brooklyn, an extreme, the school enrollment is 89% minority, compared to 43% minority in the zone.

The study's authors attribute this segregation to a tendency among wealthier parents to "vote with their feet." Rather than send their children to the neighborhood school with, say, low state test scores, they'll opt for a private or charter school.

Two of the most segregated school districts on the map, District 13 in Downtown Brooklyn and District 3 on the Upper West Side, have been embroiled in contentious rezoning battles this fall—proof of the conflicts that arise when parents dig their heels into their assigned districts, and vie for precious spots at higher performing neighborhood schools.

In both neighborhoods, NYCHA-run housing complexes (purple on the maps) share the skyline with an increasing number of new high-rises. Real estate developers push these new rentals on the merits of local high-performing public schools—PS 8 in Brooklyn, PS 199 in Manhattan. As a result, two predominantly white and upper-middle-class public schools have grappled with some of the longest waiting lists in the city, while two lower-income, predominantly black and Latino schools struggle with smaller enrollments.

The solution to city-wide racial and socioeconomic disparity in public schools, the study posits, is to "improve" struggling public schools and, in doing so, attract more affluent families.

But in DUMBO and upper Manhattan, the prospect of "improvement" has proven to be a chicken-and-egg problem. Many parents are drawn to already-flourishing schools with powerhouse Parent Teacher Associations and the funding and programming they generate for their children.

As a result, the very same parents with the time and resources to invest in their children's schools continue to balk at the very schools that could benefit from their interest.

"Families don't want to gamble with their kids," Andrea Steinkamp, co-PTA president of PS 199, told us this fall. Thanks in large part to 140 parent volunteers, her group's annual October walkathon raised about $50,000.

"When you look online and see that a school with only 10% of its students passing exams," Steinkamp said of neighboring PS 191, "that's a big risk."

#dumbo
#integration
#public elementary schools
#segregation
#Upper West Side
Do you know the scoop? Comment below or Send us a Tip